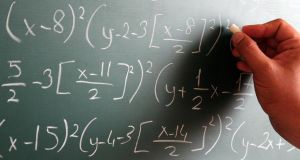 Lack of predictability in some questions welcomed. Photograph: iStockphoto/Getty Images

Students faced a very challenging higher level maths paper which many found difficult to complete in the available time.

Eamonn Toland, founder of TheMathsTutor.ie, said that paper two was more difficult than paper one, especially the concepts and skills section which had some very testing parts. “Question 7 was straightforward mathematically but students might have had difficulty in correctly interpreting the last part of that question about cylinders and spheres; it seems like a very convoluted way to solve an easy volume problem.”

Brid Griffin, subject representative with the Teachers Union of Ireland said that students felt it was a long paper and they didn’t have enough time to check their work. However, she welcomed the lack of predictability in the questions. “There were some changes in the way in which the topics interlined, with the part c of question five, for instance, not being a natural follow-on from the previous parts. Question six on the Cliffs of Moher used a diagram that was not necessarily helpful for the students, although the question itself was doable.”

Ms Griffin added that question 7 was particularly tough and demanded too much from students with too little time, although another question on probability was more accessible.

However, Robert Chaney, subject representative with the Association of Secondary Teachers Ireland and a teacher at CBS Thurles, said that his students were happy with the exam. “The examiner occasionally gave hints that they didn’t have to give and that was a welcome prompt for the students. The higher level paper was heavy on geometry which was welcomed by the students. A question on differential statistics was straightforward and uncomplicated.”

On the ordinary level paper, Margaret Kenny of Studyclix.ie and a teacher at Jesus and Mary Secondary School in Enniscrone said that the examiners managed to fit a huge range of questions and cover a broad range of material in the paper. “With a more ‘traditional’ approach to Paper 2, today’s paper was well received. The highlighting and emboldening of key words and presentation should be commended here for bringing clarity to students, that was absent in other papers. It was clear what they were being asked, which would have helped build confidence as students progressed.”

Eamonn Toland of TheMathsTutor.ie said that the ordinary level paper was a fairly straightforward affair with topics including IQ scores, the Brexit referendum and a conical sculpture. “Question 8 was quite surprising as it was a straightforward geometry question and there was no applied context at all. The question itself was not too challenging so was probably a pleasant surprise rather than a shock.”