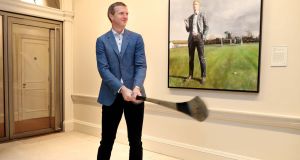 A portrait of Henry Shefflin was unveiled in the National Gallery of Ireland on Monday. The painting by Tipperary born artist, Gerry Davis was commissioned as part of the Hennessy Portrait Prize 2016. Photograph: Maxwells

The National Portrait Collection was established in 1884, the same year the GAA was founded.

The collection was founded to recognise “eminent Irishmen and Irishwomen whose lives serve in any way to illustrate her (Ireland’s) history or throw light on her social or literary or artistic records”.

Notably absent from the original criteria were sportsmen and women and it is only now 133 years later that the National Portrait Collection has got around to including a portrait of a GAA player.

Appropriately, it is that of the most decorated and arguably greatest hurler of all time, (King) Henry Shefflin, the only player to win 10 All-Ireland medals.

Shefflin (38) retired from playing with Kilkenny in 2015. He admitted to being “not very artistic in any way, shape or form” but joked that he was happy to consent to the portrait by Gerry Davis, even if the artist was from Tipperary.

Davis’s oil on canvas was commissioned as part of the Hennessy Portrait Prize 2016.

The Shefflin portrait will go on display to the public from Thursday, June 15th, when the National Gallery of Ireland (NGI) reopens its refurbished historic wing on Merrion Square, Dublin. It is on display in the Dargan Wing, adjacent to the main room of the National Portrait Collection.

NGI director Sean Rainbird said Shefflin had long been on its list for a portrait, but confessed, as an “ignorant English person” he had to look up clips of him playing on YouTube.

Shefflin is portrayed in his civvies on the pitch of his Ballyhale Shamrocks GAA ground, his hurl swung purposefully behind his head. Over the embanked area at the back of the goals, is the home where he grew up.

Shefflin said it was a “true honour” to be chosen. The portrait, he modestly claimed, was not really about him, but about the GAA, community, friendship and passion.

“It is amazing how the hours and hours I spent practising my passion have been reflected by Gerry’s passion,” he said.

He brought along his parents, Henry and Mae Shefflin, and his wife Deirdre. “They gave me my passion and love of the game,” and he added, pointing to the portrait, “that’s my home field Ballyhale”.

Davis said he spent a lot of time with Shefflin in Ballyhale to get a sense of who he was.

Kilkenny clearly miss their talisman forward and were beaten at the weekend in the Leinster hurling championship by Wexford for the first time in 13 years.

They were beaten by the better team, Shefflin suggested, and can have “no complaints” about the result.