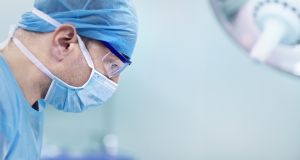 Radiologist at Letterkenny General Hospital Dr Conall Mac a Bhaird said of the emergency department that he had “never seen it as bad as it was that day”. File photograph: Getty Images

A senior hospital clinician has said there is a pressing need for reform of the health service and cited the burden of excessive bureaucracy as a debilitating factor in patient care.

Dr Conall Mac a Bhaird, a radiologist in Letterkenny General Hospital, said on Monday he was shocked at a recent experience of A&E in the hospital and the intolerable working conditions that staff endure there.

In an interview with Dr Mac a Bhaird on Barrscéalta on RTÉ Raidió na Gaeltachta, he said that he had visited the emergency department in Letterkenny General Hospital with a sick friend in the last week and was appalled by what he saw.

“I have never seen it as bad as it was that day. You couldn’t even walk around (it was so crowded). I don’t know how the staff can continue to work in those conditions,” he said.

He said that nobody should be asked to work under such circumstances and that the consequence of this deteriorating situation was very low morale.

“No doubt about it. It’s not just in A&E either, it’s throughout the hospital. Staff have extra duties, extra hours, and morale is very low; I’m only surprised that it’s not worse.”

He noted the need for extensive change to the system and the strain of excessive bureaucracy on the health service.

“There’s so much paperwork. We’re practicing defensive medicine, defensive nursing, in case there’s a court case. We need to get rid of some of that bureaucracy and to direct our attention and enthusiasm towards patient care again. We need to make it more personal and more humane than it is now.”

Dr Mac a Bhaird called on the public to use their voice to put pressure on politicians and bring about change.

“I don’t think there’s much political will to fix this problem. I don’t think we’re vocal enough about it. If you compare it with the protests over water charges in the last few years, we’ve got the emphasis on the wrong thing . . . we don’t have enough effort focused on fixing these problems.”