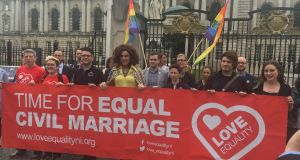 Representatives from Amnesty International, the Rainbow Project, the Irish Congress of Trade Unions, Cara-Friend, NUS-USI and HereNI are holding a march in Belfast on July 1st.

Campaigners are to hold a march in Belfast next month to demand civil marriage rights for LBGT couples in Northern Ireland. As the Conservative Party continues talks with DUP leader Arlene Foster and her Westminster team to strike a deal after last week’s election, there has been a focus on the DUP stance on LGBT rights, abortion and climate change among other matters.

Northern Ireland is the only region in the UK and Ireland that has not extended civil marriage rights to same-sex couples. Marriage equality motions have come before the Stormont Assembly on five occasions. In 2016 a motion received a majority in favour for the first time but the petition of concern blocking mechanism was used by the DUP so the move was only symbolic.

With a Stormont talks deadline of June 29th, which will result in either a Northern Executive up and running or direct rule from London after the March 2nd assembly election, campaigners are calling for whichever government is in charge to deliver equal marriage legislation for Northern Ireland.

Amnesty International, the Rainbow Project, the Irish Congress of Trade Unions, Cara-Friend, NUS-USI and HereNI are asking the public to join them on a march from Writers’ Square in the Cathedral Quarter to Belfast City Hall on July 1st at 2.30pm. John O’Doherty from the Rainbow Project, Ireland’s largest LGBT support organisation, said the Ipsos Mori poll of June 2016 showed 70 per cent of the public support marriage equality legislation.

“Support for marriage equality crosses traditional political and religious differences in Northern Ireland, so we call on people of all backgrounds to join us on this great march for equality,” he added.

Amnesty programme director Paddy Corrigan said if Stormont is incapable of delivering equality then it will fall to Westminster. “Marriage equality in Northern Ireland is a litmus test for whether or not any future government is committed to treating all citizens of this country equally,” he said. “No backroom politics can be allowed to stand in the way of equality.” Drag queen Lady Portia Di’Monte, aka Marcus Hunter-Neill, said with the focus on the DUP’s stance on LGBT rights in the media in Britain he hoped the British prime minister Theresa May would use her influence and raise equality issues with Ms Foster.

“I want Northern Ireland to be brought into the 21st century,” he said. “It is so embarrassing when I travel around the world that we don’t have marriage equality but the rest of the UK has it. We feel like a backwater.”

Belfast couple Catherine Couvert (54) and Sally Bridge (49) “want marriage equality for LGBT people in the society we live in”. Catherine said: “It is about a society that treats everyone fairly, equally, where young LGBTs can grow up and feel like there isn’t any kind of second-class citizen titles for them.” Sally said: “It’s not equal and it’s very demoralising and you think about the amount of young people these days who are brave enough to come out and still feel undervalued.”