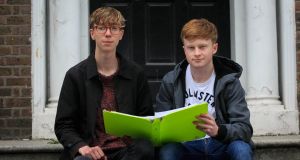 Familiar essays and an accessible aural exam would leave most students pleased with higher level Irish paper one, according to Emer McTernan, Studyclix.ie expert teacher.

“This afternoon’s paper would leave most students pleased,” she said. “Old reliable essays like the education system and scandals in sport meant most students would have had little difficulty tackling an essay question.”

John Gavin, founder of LeavingCertIrish.com, said that nearly every student in the country was expecting Brexit or homelessness to appear on the paper. “Both appeared, with the latter topic listed as the speech option under the heading: ‘the housing problem in Ireland today.’ This title was a twist on the standard topic of homelessness, requiring candidates to write a few paragraphs on the broader issue, which might have frightened off a few people. As both of these topical titles appeared under the speech and debate section, something which requires candidates to include a specific style and terminology, it might not have suited everyone.”

The essay titles covered a broad range of topics including the education system, equality in society today, violence around the world and political leaders today. “Any student who was well prepared for these topics for the oral exam should have had both the vocabulary and fluency to write a very comprehensive composition,” said Mr Gavin. “

Mr Gavin said that all of the questions on the cluaistiscint were well presented and should have been accessible to every student, while Ms McTernan said that students seemed to find the aural exam easier than in previous years.

Clodagh Sweeney, a higher level student at Jesus and Mary Secondary School said that the general essay questions made for a nice paper with few issues. The aural was far easier than our mock exams so, overall, quite happy. There were few surprises and the tape was easier than any I tried before, making for a nice introduction to a nice paper.”

Ms McTernan said that the essay questions posed at ordinary level would have been easily accessible, even to weaker candidates. “The vocabulary used was easily understood and many candidates would have been able to rely on material they had learnt for their oral exam.”

Mr Gavin said that some of the verbs used in the ordinary level listening comprehension would have challenged quite a few of the candidates, although the composition titles were very fair and provided candidates with a great range of topics to choose from.