Some climbers cite family reasons, others religious ones, for undertaking ascent 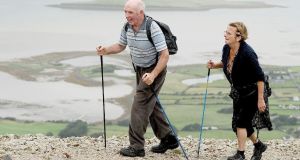 Mayo became Mecca, meteorologically speaking, just before noon on Sunday as the weather gods lifted the pillow of cloud off the pyramidal peak of Croagh Patrick for the annual Reek Sunday pilgrimage.

Among the colourful caravan of pilgrims, Alan Laffey from Co Galway, had already made his descent before the big blast of sunshine but he was still sweating and happy. He was looking for a “Croagh Patrick candle” at one of the bazaar of stalls at the foot of the 764-metre-high mountain, whose cross-millennial narrative reaches back to the pre-historic harvest festival of Lughnasa.

The annual pilgrimage, which Laffey has undertaken since 2003, provides him “with a certain comfort because of a line of tragedy” in his family.

“I suppose there is a draw to it but it is more spiritual for me, than formal religion.”

He said his mother died by suicide when she was aged 28 in 1977 and two first cousins took their own lives within a year of each other when aged in their late 40s.

“There was no counselling back in the 1970s for my Dad and all he wanted was for people to call to the house but they felt awkward and didn’t know what to say,” Laffey said.

He said his father, who is 80 now, never talked about it back then because he felt he had to “just get on with rearing his young children”.

For Patrick McDonagh, a father of five from Newbridge, Co Kildare, the tradition of climbing the holy mountain on Reek Sunday reaches right back across the generations to his grandparents. He travelled to Co Mayo on Saturday evening with the family and their dog, and slept in their van for the night before making the ascent in the early hours.

“It’s about honouring St Patrick and giving something back. Young people need to be getting back into religion,” McDonagh said, before gifting a miraculous medal to this reporter “for luck”.

In his Reek Sunday homily, the Catholic Archbishop of Tuam, Dr Michael Neary observed that the challenges of such “rudely physical and penitential” pilgrimages “may seem meaningless to unbelievers” but, instead, pose fundamental questions.

“People don’t stop wanting God because they stop believing in him. And that enduring hunger marks the modern western world. It questions, suspects, argues, is dismayed, disappointed, disbelieving and yet keeps searching,” the Archbishop said.

He remarked on how deeply anxiety was pervading every dimension of our lives and how the intrusion of social media exacerbated this problem.

In contrast, Ian Shannon, from Dungannon, said he believed society must be freed of institutional religion.

“I have freed myself from religion because ministers and priest have ruined this world. You must accept that the Lord Jesus Christ is your personal saviour and then you will have a direct line to God,” he said, adding he believed he had “saved the souls of ten people” on Sunday.

He was among a broad gallery of evangelists who lined the pathway offering alternative ways to find “the true god”.

While Eoin (16) and Daragh (14) Fox, of Bofield, Bonniconlon, Co Mayo, said a few prayers with their Dad, John, at the summit, they were also interested in breaking their climbing record of this precipitous pathway.

“I’ve done it about seven times and we say some prayers at the top for family, but not too many. My brother and I climbed it in about 55 minutes, Dad was a bit slower,” Eoin said.

While the sunny weather meant numbers were up on last year’s pilgrimage, according to locals, the good conditions meant there were fewer incidents for the teams of mountain rescue and Order of Malta volunteers who implement a massive operation for the event.

A spokesman for Mayo Mountain rescue confirmed there had been one serious accident which involved the evacuation of a male to Mayo University Hospital. Shortly before 5pm, it said 22 injuries were treated by members of the Order of Malta Ambulance Corps, Mountain Rescue and the Civil Defence members.

Plans to develop a dedicated pathway, which traverses commonage lands owned by local farmers, made from indigenous stone, have been submitted to Mayo County Council.