Poet and ‘intellect’ Derek Mahon laid to rest in Cork

Mourners ‘privileged to be here to celebrate the life of ... a conduit of sublime thought’ 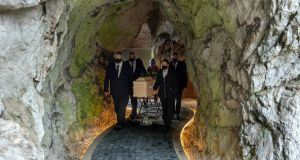 The remains of poet Derek Mahon are brought into The Island Crematorium in Ringaskiddy, Cork on Wednesday. Photograph: Michael Mac Sweeney/Provision

Poet Derek Mahon was a major intellect who addressed the great existential questions of his time, mourners at his funeral in Co Cork heard on Tuesday.

Mahon (78), died on October 2nd after a short illness. His three children were abroad and unable to travel because of the Covid-19 pandemic.

Instead, it was primarily a small group of friends from Kinsale who gathered at the Island Crematorium in Ringaskiddy, Cork Harbour, to pay their respects and comfort his partner, Sarah Iremonger, as she prepared to say farewell.

Friend and former UCC president, Prof Gerry Wrixon welcomed the mourners into the round roofed crematorium on Rocky Island as a light drizzle began to slant in over the grey green waters of Cork Harbour.

“We are all privileged to be here to celebrate the life of someone who was not only our friend but was also a major intellect, a conduit of sublime thoughts and a great Irish poet,” said Prof Wrixon of the Belfast born writer.

“Because Derek lived in Kinsale on and off for 40 years and although it is sad that his family are unable to be here, in a way it is appropriate that it is left to us, his friends from Kinsale to come together to remember him at this time.”

Prof Wrixon spoke of how Mahon had had found rest, comfort and inspiration in Kinsale, which proved a safe and productive haven for him while he also found love there when he met his partner, Sarah Iremonger.

Friend and publisher, Peter Fallon paid a warm and insightful tribute in which he recalled Mahon’s friendship with Seamus Heaney as well as Brian Friel whom he noted had died on exactly the same date five years earlier.

Mahon’s personal style might be described as “somewhat dishevelled, slightly shabby chic” but his work, including poems on the threat to the planet, “offered an immaculate clarity, a light that helped transform the world”.

“Derek inherited existential questions from the mid 20th century and engaged with and responded to them. Perfectly classical, perfectly current, his poems are models of their art,” said Fallon.

Katherine Beug read one of Mahon’s poems, At the Window about writing in Kinsale and Matthew Geden read a poem from Mahon’s latest collection Washing Up where he contemplated his own mortality.

Gavin Ryan read “The Cloud Ceiling” which Mahon had dedicated to his daughter, Maisie. He also read a poignant piece from Rory in which he recalled his father teaching him how to place chess when they lived in London.

Siobhan Ryan read a piece written by Mahon’s daughter, Katie in which she recalled as she began to carve out a career as a musician, her father took her out for a meal in London and gave her the best advice she had ever received.

“ ‘Now,’ he said, ‘if you really want to stand out, you must have panache’. He was right and in my pursuit of a creative life, I fervently hoped it would come as naturally to me, as it did to him.”