School secretaries set for strike action in dispute over pay 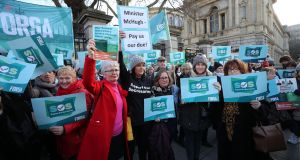 School secretaries gathered for a rally at the Dáil in January this year. Photograph Nick Bradshaw for The Irish Times

School secretaries are set to stage three days of strikes in the coming weeks over pay.

They are also planning to follow this up with an indefinite stoppage from mid-November.

The trade union Fórsa, which represents more than 1,000 secretaries in primary and secondary schools across the country, said on Wednesday that notice of industrial action would be served next week to over 1,000 individual schools and the Department of Education.

The department estimated that it could cost €50 million to meet the claims made by school secretaries.

Minister for Education Norma Foley said it was disappointing and regrettable that in circumstances where talks were actually ongoing that Fórsa had moved to industrial action.

“This will impact on the day-to-day operations of schools at this most critical time and could further disrupt tuition for students who have recently returned to school”.

Speaking in the Dáil, Ms Foley also told Social Democrats TD Gary Gannon that schools will be funded to employ a replacement secretary or caretaker if staff at very high risk of contracting serious illness from Covid-91 cannot work on school premises.

Mr Gannon appealed to the Minister to use the Workplace Relations Commission mechanisms to refer the case to the Labour Court. He said the response of department officials at the WRC was “quite insulting” and a “turning of the ship” from what had been agreed by the Minister’s predecessor and he said the Minister should address the issue before the schools have to close.

But Ms Foley said there were a “number of technical issues” around such a referral as “neither the department, nor the management bodies are the employers of the staff in question”.

Members of the ASTI are currently voting on whether to take industrial action up to and including strike action over lower pay in place for more recent entrants to the profession and in relation to resources and practice in schools after they re-opened following the closure due to the Covid-19 pandemic. This ballot concludes on October 22nd.

School secretaries are seeking an end to the existing two-tier system under which some are directly employed by and paid by the Department of Education and have public service employment status, while the majority have their pay and conditions determined by school management boards.

The union said under the two-tier system, most school secretaries were “leftearning just €12,500 a year, with irregular, short-term contracts that force them to sign on during the summer holidays and other school breaks”.

The union’s head of education, Andy Pike, said the decision to strike was taken because school secretaries had exhausted all the options available to bring the dispute to a satisfactory conclusion.

“Recent engagements with the department and the Minister (for Education) have shown that they are not serious about bringing the long-standing unfairness for school secretaries to an end.”

A spokesman for the Department of Education said the Minister, Norma Foley was “keenly aware of the vital role played by school secretaries”.

“Significant improvements to the pay of secretaries and caretakers have been made since 2015 under a pay arbitration agreement implemented by the Department. This provided for a cumulative pay increase of 10 per cent between 2016 and 2019 for staff and that a minimum hourly pay rate of €13 be phased in over that period.

“A survey conducted by the department last year found that the average hourly rate paid to a school secretary is €15.49, which is in line with the hourly rate for a Grade III clerical officer. “

The Department of Education said the matters at the heart of the dispute were complex and raised significant policy, legal and Exchequer cost issues.

“The cost of all of the elements of Fórsa’s claim, that is, to pay secretaries and caretakers on the maximum of the scale at full-time hours, is in the region of €50 million per annum, with a further substantial cost of approximately €36m for the provision of pensions.”