Europe ‘should consider changing laws’ to help Ireland in Brexit

EPP leader: ‘too little awareness of what Brexit means’ 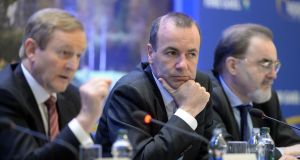 The leader of the European People’s Party Manfred Weber has said that Europe should be willing to change its laws and regulations to facilitate special Brexit arrangements for Ireland.

“Yes, if it’s part of a package of solutions, of course, no problem,” Mr Weber said when asked if the EPP and the European Parliament would co-operate in changing EU rules to facilitate a special deal to maintain a soft border in Ireland.

The EU’s negotiating guidelines promise to preserve the Common Travel Area between Ireland and the UK as long as it is in accordance with EU laws. Committing to change those laws would be an important concession as Ireland searches for ways to mitigate the impact of Brexit on the border.

However Mr Weber, leader of the largest group in the European Parliament, adopted a tough tone on the Brexit negotiations, saying that “in London there is too little awareness of what Brexit means”.

“If we allow cherrypicking people in the EU would see that leaving the EU is not a problem.”

Several EPP figures echoed his sentiments during the two-day meeting in Co Wicklow.

“In London there is too little awareness of what Brexit means,” Mr Weber said.

“My perception is that London knows what they don’t want, but they have no idea what they actually want,” he said.

He said that in Brussels “there is a readiness to be very tough. London must be aware of this.”

If there is no agreement between the EU and the British, Mr Weber said, “for us, damage. But for Great Britain, a disaster.”