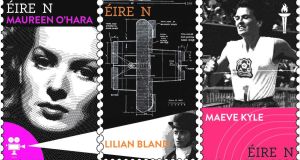 A magazine editor, a Hollywood actress, an aviator, an Olympian and an artist are set to appear on a new set of colourful stamps which have been issued this week to mark International Women’s Day 2020.

An Post’s five “pioneering Irish women” stamp collection celebrates a number of people who achieved international recognition during their lifetimes.

The first of the stamps recreates the cover of American magazine Harper’s Bazaar in honour of its editor-in-chief Carmel Snow – born Carmel White – from Dalkey, Dublin, who ran the publication from 1934 to 1958.

Hollywood actress Maureen O’Hara appears on the second stamp in the series while Lilian Bland, the first woman in the world to design, build and fly an airplane, features on the third. Bland, who was born in Kent but came from a long line of Irish descendants, worked as a sports journalist and press photographer in London in the early 1900s. She first flew her flying machine, named Mayfly, on the slopes of Carnmoney Hill near Belfast.

The image of Olympian Maeve Kyle, the first woman to represent Ireland at the Melbourne Olympics in 1956 and the country’s first triple Olympian, also features in the collection, along with Sarah Purser, portraitist and stained glass artist who was the first female member of the Royal Hibernian Academy in 1924.

Managing director of An Post retail Debbie Byrne said the company wanted to shine a light on the “remarkable achievements” of a group of Irish women, some of whom were practically unknown. “Their names are strangely absent from the history books and rolls of honour. These are the perfect stamps to post to the women we know who inspire, challenge and sustain us, and let them know we’re thinking of them.”

Created by Dublin-based graphic designer Oonagh Young, the stamps are available to buy at the General Post Office in Dublin, in selected post offices nationwide and online at anpost.com/shop.