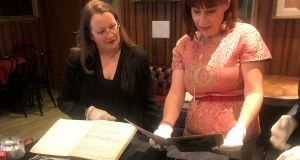 Mairead Delaney, archivist at Abbey Theatre in Dublin, shows Minister for Culture Josepha Madigan some of the artefacts on display at the city’s theatre. Photograph: Cate McCurry/PA Wire

Minister for Culture Josepha Madigan has said she is happy with the way the Abbey Theatre has responded to controversy over its changing artistic model, as well as gender and pay issues.

Earlier this year 312 theatre practitioners signed a letter to The Irish Times expressing grave concern about the theatre’s use of co-productions, which resulted in fewer in-house plays. The artists also raised concerns that a two-tier pay system was in operation. The practitioners also expressed concern about gender and pay rates.

The Abbey subsequently sought a meeting with its artists at which time Ms Madigan told the Dáil she had not ruled out direct intervention in matters between the Abbey and the artists.

However speaking in the Abbey as she approved the start of an appraisal of the Abbey’s redevelopment plans on Monday, Ms Madigan said the dialogue between the parties had been good.

“I think it has been a real demonstration of collaboration between theatre practitioners, between the Abbey and various other stakeholders and I’m happy to have facilitated that conversation”.

She said it was “an ongoing conversation. It is not something that has an end point at any stage. It is important that there is communication, it is always about communication and that continues”.

Referring to the Abbey’s expansion plans Ms Madigan said the building in which the national theatre was housed was more than 50 years old “and is widely recognised as deficient in the facilities it provides for artists, audiences and staff and in terms of its energy efficiency”.

The Government has given an indicative figure of €80 million as its contribution for the redevelopment of the Abbey Street premises, part of a €460 million provision in Project Ireland 2040 to reinvigorate the State’s cultural institutions.

The Abbey Theatre, also known as the National Theatre of Ireland, first opened its doors to the public in 1904. It was founded by Nobel laureate William Butler Yeats and Lady Augusta Gregory and has played a prominent role in the literary, social and cultural life of Ireland.

Some of the artworks on display for the Minister’s visit included embroidery depicting the original Abbey Theatre exterior by Lily Yates, as well as an 1890s stage-lifting mechanism, an original programme from the opening night in 1904, and a number of drawings of the old Abbey Theatre before its demolition.

The theatre has already acquired a new building next-door, which overlooks the Liffey and among the possibilities are an expansion of the Abbey with a new entrance from the quays.

Commenting on the announcement, Directors of the Abbey Theatre, Graham McLaren and Neil Murray said: “We are delighted to receive approval to move into the next stage of planning for a new Abbey Theatre for the artists and audience of Ireland.

“Our ambition is to build a major new cultural centre in the north inner-city, on a site which incorporates our present site at the junction of Abbey Street and Marlborough Street, and extends to open out onto the River Liffey.

“The space will be a destination for artists to create and collaborate and an accessible hub of activity, for the public to experience, throughout the day and evening.”