Secret garda recordings can be used in murder conspiracy case 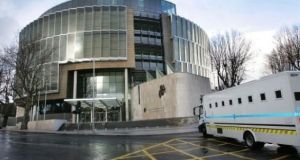 The Special Criminal Court has ruled that CCTV footage and recordings from covert audio devices placed on six cars as part of an investigation into the Kinahan cartel can be admitted as evidence at a conspiracy to murder trial.

Liam Brannigan (37), from Bride Street, Dublin 8, is charged with conspiring to murder Gary Hanley at a location within the State between September 15th and November 6th, 2017.

The accused has pleaded not guilty.

Seán Gillane SC, for the State, opened the trial earlier this month, saying the prosecution intended to use CCTV and audio recordings to prove Mr Brannigan was “fully knowing of the plot” to kill Mr Hanley.

Mr Brannigan’s legal team last week submitted an application for the CCTV and audio material to be excluded from the trial.

The court has already heard that gardaí collected 3,500 hours of CCTV from premises across Dublin as part of their investigation, and that the prosecution team intends to show the non-jury court a near 50-minute montage of CCTV material.

He submitted the evidence demonstrated that gardaí “procured and processed vast amounts of CCTV consciously and deliberately using the infrastructure of a variety of CCTV systems which they knew were reckless as to whether or not they operated within the law”.

On Wednesday Mr Justice Coffey said all of the proposed evidence had “relevant and probative” value.

The court has already heard evidence from the head of the National Surveillance Unit, Detective Superintendent William Johnson, about the securing of approval for the deployment of listening devices on several cars in August, September and October 2017, as part of an ongoing Garda investigation into members of the Kinahan organised crime gang and their associates.

Last week Mr Ó Lideadha submitted that the court heard no notes were taken of phone conversations between Det Supt Johnson and his officers, during which Det Supt Johnson gave initial approval for the cars to be bugged.

Mr Ó Lideadha also said the court had not heard any direct evidence or hearsay evidence about the state of mind of the officers making the request for the cars to be bugged and referred to this as a “missing link” in the evidence.

Mr Ó Lideadha also argued that a member of the National Surveillance Unit, referred to as BL, who gave evidence of giving USB keys containing audio files from the vehicles bugged by gardaí to a member of the Garda National Drugs and Organised Crime Bureau, could not independently state which audio recording matched which recording device and which vehicle.

However, Mr Justice Coffey said the court was satisfied the recordings were “lawfully made” and “valid”.

Mr Justice Coffey recalled that Det Supt Johnson told the judges that what is to be in evidence in the trial is a “true, unaltered copy of the data”.

The judge also noted that Det Supt Johnson gave evidence that there was “no way” the downloaded material from the devices could have been interfered with.

He said the court is satisfied there was sufficient evidence put before the court to satisfy it of the provenance of the recordings and to find there was “no material break in the chain of evidence”.

In relation to the CCTV material, Mr Ó Lideadha had submitted that the evidence demonstrated that gardaí “procured and processed vast amounts of CCTV consciously and deliberately using the infrastructure of a variety of CCTV systems which they knew were reckless as to whether or not they operated within the law”.

The barrister also argued the “data controllers” - people who owned the CCTV systems - are required to be registered and also need to give notice to the public that their data is being recorded by way of signage.

Mr Ó Lideadha argued: “What they’ve [An Garda Síochána] done is they’ve turned the city and all of the CCTV infrastructure into a de facto surveillance operation without any protections and in breach of law.”

However, Mr Justice Coffey rejected this argument and told the court that there was “no coercion” used by gardaí in making or procuring the CCTV images.

Mr Justice Coffey also said the court cannot accept there is sufficient evidence on which to decide that the CCTV recordings or relevant CCTV images engaged or breached the accused’s right to privacy.