Fine Gael TD steps down as chair of ‘votegate’ inquiry 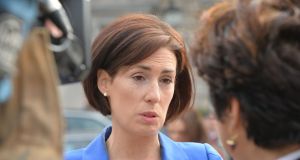 Committee chairwoman Hildegarde Naughton said: ‘I wish to announce that I have recused myself from the investigation of complaints.’ Photograph: Alan Betson

The chair of the committee investigating proxy voting by two TDs in the Dáil has stepped aside from the investigation because she herself has voted on behalf colleagues who were in the chamber.

Fine Gael TD Hildegarde Naughton is the chair of the Dáil Committee on Members’ Interests which is examining whether or not Fianna Fáil TDs Timmy Dooley or Niall Collins breached ethics legislation when Mr Collins voted on behalf Mr Dooley while he was absent from the chamber.

The investigation is taking place on foot of a complaint made by Fine Gael TD Noel Rock.

After the incident came to light, dozens of TDs said that they had voted on behalf of colleagues on the Dáil’s electronic voting system, but always while the other deputy was present in the chamber. That practice has now been the subject of a clamp-down by Ceann Comhairle Seán Ó Fearghaíl.

The committee met on Wednesday for the first time to investigate the events involving Mr Collins voting six times on behalf of Mr Dooley while the latter was absent from the chamber. It will decide if either, or both, of the two TDs breached the Ethics in Public Office Act, and if so, will also decide what action, including sanctions, may be taken.

At its initial meeting, Melissa English, the parliamentary legal adviser, told committee members that in the interest of fair proceedings, any member who had voted for another TD, or had a colleague vote for them, even while present in in the chamber, would have to recuse themselves from the committee.

“In light of legal advice received by the parliamentary legal advisor, I wish to announce that I have recused myself from the investigation of complaints,” said Ms Naughton in a statement. She said she would continue to remain as chair of the Committee on Members Interests but will take no part in this particular investigation.

“While the decision is not made lightly, it is one I am making to ensure the integrity of the process. It is vital that there is not even the slightest perception of bias in the proceedings of the committee.

“Now is the time to do so, prior to the committee commencing its work,” she said.

“The Taoiseach, the leader of the Opposition and many other members of Dáil Éireann have voted for a colleague while asked to do so while that colleague was in the chamber. So have I, on less than a handful of occasions. I have never voted for someone who was not present in the chamber,” she said.

“While the advice I received indicates that any challenge to my role would be unlikely to be successful, I am motivated by an abundance of caution.”

The other members of the committee will continue to deliberate on the matter. They are Mattie McGrath (Independent), Jonathan O’Brien (Sinn Féin), Eamon Scanlon (Fianna Fáil) and Willie Penrose (Labour).