‘People took their masks off as soon as the inspector passed’

How are public transport passengers faring with the new rules on face coverings? 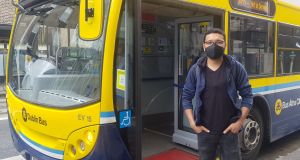 Johnes Camargo waiting on Abbey Street to board the bus to work. Photograph: Shauna Bowers

Just before 8am on Monday morning, Gerard Sweetman stood at the bus stop on the main street of Swords, Co Dublin, waiting to board the 41C.

“I’m going into the hospital to get my blood tested. It’s my first time wearing a mask, it feels a bit strange,” he said.

Sweetman, who had already travelled by bus that morning from his home in Rush, had to get three buses before arriving at his final destination at Beaumont Hospital.

“I’ve a bit of a journey so I’m going to see how long I can last with it on. I don’t want to take it off. It was given to me by Rush community centre to keep us all safe,” he added.

Since Monday, members of the public are not permitted to travel by public transport without wearing a face covering unless they can demonstrate a “reasonable cause” not to wear one.

Anyone who fails to comply with a request to wear a face covering on public transport is deemed to have committed an offence and could face a jail sentence of up to six months and/or a maximum fine of €2,500.

It would appear that the introduction of the new regulations have been effective, with most people wearing face coverings on public transport in Dublin City on Monday morning.

Of the eight people who boarded the bus between Swords and Dublin City Centre, all but one had a covering on their face before boarding the vehicle.

The one woman who was not wearing a face covering prior to getting on the bus happily pulled a pink disposable mask out of her pocket when reminded of the regulations by the bus driver.

Sam Jaiyeola, a bus driver who drove the 38 route towards Damastown on Monday morning, noticed an improvement in compliance.

“It’s been okay but we can’t force people. We can only remind them to wear a mask,” he said.

“We can’t stop them getting on because some people have medical conditions that mean they don’t have to wear it and we can’t tell that from looking at them so we can’t force people to wear them. We are not medical doctors.”

Colm Mansfield, who was waiting for the red line Luas on Lower Abbey Street, believes most people are now complying with the rules.

Rory Curran, who had just disembarked the Luas green line, said the increase in uptake of coverings makes him feel safer while travelling.

“I was on the Luas there, on the green line and I’d say about 90 per cent of people were wearing them. If someone started coughing there near me, I’d much rather they’d have a face mask on. If I had Covid but didn’t have symptoms wearing a mask could prevent me from giving it to someone else. I really don’t mind it at all,” he added.

Deirdre Power travelled from Waterford to Dublin on the train on Monday morning. She said that wearing masks is now more commonplace, but that some people were going out of their way to avoid them.

“On the train this morning people were wearing face coverings but then they took them off as soon as the inspector passed them which just completely defeats the purpose,” she said.

“I don’t understand the people who don’t want to wear them. It makes no sense and if it keeps people safe then I think we should all do it.”

Johnes Camargo, who was waiting on Abbey Street for a bus to work, believes more people would wear masks if they were more comfortable.

“A lot of young people especially don’t want to wear them. I can’t even wear them around my ears because it’s uncomfortable. I wrap them [the elastic straps] around my glasses and then tie them at the back of my head,” he said. “It’s better to be safe than sorry.”