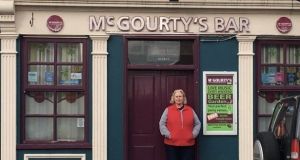 Lorna McGourty, who runs McGourty’s pub in Castlerea: she is concerned about the lack of clear guidance ahead of the planned reopening next week.

When pubs closed in March due to coronavirus, Pearse Bolger found himself left without any social outlet.

Before the virus, he would visit Mulvihill’s bar on the town’s main street three times a week, where he would sit with his guide dog and chat to acquaintances.

For Mr Bolger and many others, the pub is not just a place to go for a drink – it is a vital social lifeline.

“It was a very important social avenue to me due to the fact that I’m technically visually impaired,” Mr Bolger says. “Otherwise, I just don’t go out.”

“I’d be in three, maybe four nights a week. You’d have your three pints, and you’d tip on home. It would actually be very relaxing – I suppose you could say it’s a kind of therapy.”

Lockdown for Mr Bolger has been a lonely experience, and he is looking forward to getting back to his local pub to meet his friends again.

If all goes to plan, pubs will be allowed to reopen from July 20th under Phase 4, the final phase of the lifting of restrictions put in place to ease the spread of the virus – but problems persist. Publicans are still waiting for instruction on what measures they need to put in place in order to comply with public health guidance.

The Vintners’ Federation of Ireland has heavily criticised the lack of guidance, and has said that 3,499 pubs yet to reopen have been left in the dark ahead of July 20th.

Lorna McGourty, who runs McGourty’s pub in Castlerea, is concerned about the lack of clear guidance ahead of the planned reopening next week. She is eager to launch back into business after a difficult lockdown period – but wants to make sure that they reopen in a way that is safe for staff and customers.

“We’re ready to go, but at the moment we’re in limbo,” she says.

She is hopeful that the new guidelines will allow customers to sit at the bar, which is “the most important aspect” of a rural pub, especially on weeknights.

“If we can’t use our bar counter, I don’t know how it’s going to work in rural Ireland on a Tuesday, Wednesday or Thursday, because that’s where the banter and the sociability is,” she says.

She considers herself lucky to be able to reopen the doors, given many other rural pubs have shut for good.

But there are worries about the future. Publicans have no way of predicting what business will be like when they reopen. There are concerns that the coronavirus pandemic will have changed people’s drinking habits and that many will be afraid of going into their local pubs for fear of contracting the disease.

“Where do we go from here? We’ve survived so far, and now we have to go into full survival mode,” she says.

“The way we’re looking at it is, the next year, it’s about survival and not profit.”

Damien Garvey, whose parents own Garvey’s pub in Ballintubber, Co Roscommon, says lockdown hit them hard – but like McGourty’s, their business has survived and they are planning to reopen as soon as allowed.

They have started putting Perspex screens up and have put social distancing measures in place in an effort to prepare – but like many other publicans, they are anxiously awaiting firm guidance.

Mr Garvey hopes commercial rates and the level of VAT paid by pubs will be slashed in an effort to help the industry recover from what has been a difficult period.

“I don’t know what they’re dilly-dallying over. It’s a no-brainer for all the hospitality and tourism industry. It’s going to be on its knees, and they have to reduce it, if not go to zero, on the VAT rates. I know the councils are saying they don’t have money, but you can’t take blood out of a stone.”

Despite this, he and his parents are looking forward to reopening to continue providing what he sees as a vital service to their local customers.

“It’s their only social outlet – maybe that and the mart,” he says. “It’s awful hard on them. I’ve talked to a few of the older neighbours when I’ve been driving by . . . They’re bored off their heads.”

He says many older people in the area who live alone have had virtually “no interaction” with other people throughout lockdown.

“We have a few bachelor farmers there now and they’d be well into their 60s, hitting 70, and they’re totally lost.”

For this cohort, the rural pub is a lifeline. It allows them to get out and meet others – and that alone is enough of an argument to reopen pubs, Mr Garvey believes.

“I think for all the negatives a pub has, there’s a lot of positives there as well. Especially in rural Ireland.”