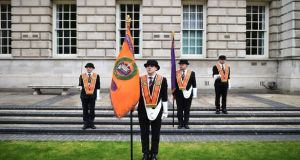 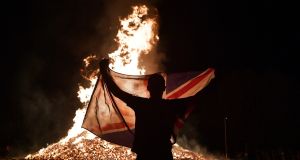 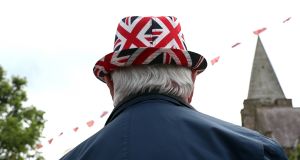 Close to 250 bands participated in the “Twelfth at Home” Orange Order celebrations in Northern Ireland on Monday.

The 18 traditional Orange Order main parades and scores of feeder parades were cancelled by the institution this year due to the Covid-19 restrictions.

Instead, 248 bands were given permission by the Parades Commission to parade locally throughout the North.

Bands were obliged under the coronavirus regulations to observe social distancing rules and to have no more than 30 members.

Orange Order leaders urged members and supporters to celebrate the day mainly at home and not to follow the bands, but rather to observe them from their homes as they played on their roads and streets.

The grand secretary of the order, the Reverend Mervyn Gibson said people should “stay in their homes and let the music come to them”.

He said Orange leaders had appealed to people “to stay in their gardens and if you hear a band don’t follow it”.

It appears that for the most part his injunction was observed but there were areas, particularly in some parts of Belfast, where this rule was ignored.

It was clear that on the Shankill Road and on Sandy Row in Belfast on Monday afternoon and evening crowds of well over 100 had gathered on the roads to observe and dance along with the bands.

There also were complaints about a number of Eleventh Night loyalist bonfires being lit on Saturday night contrary to Covid-19 rules while on Friday and Saturday nights there was some disorder in the nationalist New Lodge area of north Belfast. Sectarian messages were displayed at several bonfires, including attacks on the late senior republican Bobby Storey.

Mr Gibson said there were “some hiccups” over the weekend but, generally, he was pleased with the way Twelfth unfolded.

He said if there were instances where the social distancing rules were not kept then that was wrong and should be investigated.

He said however that matters should be kept in perspective and his experience was that the Covid-19 regulations were largely observed.

“In the perspective of things I think the day has been a success (with) the vast majority of people staying at home and enjoying the Twelfth day,” he told BBC Radio Ulster.

And as the Twelfth day entered the Twelfth night Mr Gibson urged caught up in large crowds to go back to their homes.

Mr Gibson said the PSNI was investigating the large crowds that attended the funeral of Bobby Storey and also the crowds who attended Black Lives Matter protests in the North. In relation to the Twelfth if there were crowds of “more than 30 then that has to be investigated” by the police, he added.

As well as the local parades the Orange Order urged people to listen to its “pop-up” station, Radio Boyne, which featured music, hymns and historical detail of how King William defeated King James at the Battle of the Boyne 330 years ago in 1690.

Traditionally, after the outward parades three resolutions are read at the 18 fields where Orange men and supporters gather before making their return parades in the evening.

The order published the resolutions which dealt with faith, loyalty and the British state. These offered sympathy to people bereaved during the coronavirus pandemic and thanked the National Health Service and other key workers for their efforts.

They also reaffirmed their loyalty to Queen Elizabeth and reiterated the order’s “ongoing opposition to any political or economic developments which would see Northern Ireland’s constitutional position undermined as a result of the implementation of Brexit”.

“Society must never be allowed to forget the cost paid by our community including the many members of this institution murdered at the hands of terrorists,” the third resolution stated. “No political deal should permit the continued distortion and revisionism we have witnessed by those who seek to rewrite the true legacy of those years,” it added.

The restricted celebrations took place on July 13th this year as the Order does not parade on July 12th when that date falls on a Sunday.

Bonfires lit in loyalist areas of North despite Covid-19 restrictions

Chairman of Fáilte Ireland resigns after it emerged he is holidaying in Italy 14:06
Urgent report on Dublin eviction ordered by Deputy Garda Commissioner 14:56
Man arrested in Kilkenny for possession of explosives 11:48
Investigation under way after body found in Dublin house fire 10:45
Cousins went paddle boarding at Furbo as usual location was cut off due to Covid-19 10:27