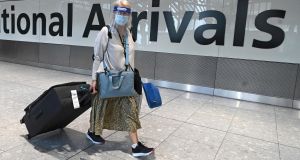 A passengers wearing a face covering at Heathrow airport at the weekend. Photograph: Daniel Leal-Olivas/AFP via Getty Images

There have been no new deaths from Covid-19 reported to the National Public Health Emergency Team (NPHET), the Department of Health said on Sunday.

Another 17 cases of the virus have been confirmed, bringing the total number of such cases to 25,628. The death toll from the disease in the Republic remains at 1,746.

The median age for those testing positive for the virus was 48 while 11 people were being treated in intensive care units for the virus on Saturday evening, the department said.

Dr Ronan Glynn, acting chief medical officer, warned that Covid-19 was “still out there” and that it “only needs the smallest window of opportunity to become a major problem once again”.

Dr Glynn called on members of the public to continue protecting themselves and others, watch out for symptoms, wash their hands and wear a face covering where appropriate.

Any person with concerns about symptoms should isolate themselves and contact their GP immediately, he said.

The figures came as a leading expert on international health called for greater “teeth” to force people arriving into the State to quarantine for 14 days, as was currently recommended.

Dr Sam McConkey, associate professor and head of the department of international health and tropical medicine at the Royal College of Surgeons in Ireland (RCSI), warned of a “public health” disaster in the United States. People arriving from that country should be among those compelled to self-isolate for a fortnight, he told RTÉ Radio.

People arriving from Britain and Portugal should also be made quarantine, while “green” countries from where people could arrive without quarantining could include Greece, Norway, Finland, Denmark, New Zealand and China.

He was speaking after Taoiseach Micheál Martin advised British holidaymakers not to come here at present.

In an interview on the BBC Andrew Marr Show, Mr Martin said Ireland was taking a “cautious approach”, emphasising that all overseas visitors to the Republic would have to quarantine for two weeks.

The Cabinet is to meet on Wednesday to discuss the preparation of a green list of safe countries for travel, and also to make a final decision on whether the July 20th reopening date for pubs that do not serve food will go ahead.

Ministers are first to receive input from NPHET.

From Monday face coverings will be mandatory on public transport. Passengers who fail to comply could face up to six months in prison and a fine of €2,500.