Airlines will have to inform arrivals of 14-day rule, and location checks will be increased 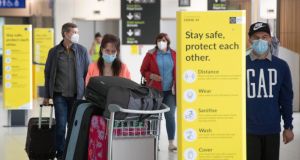 Airlines and tour operators will be told to inform customers flying into Ireland they must quarantine on arrival for 14 days, as the Government considers a wide range of measures to improve compliance to prevent the spread of coronavirus.

However, Minister for Health Stephen Donnelly said the Attorney General had advised the Government that measures such as mandatory self-isolation “are difficult from a legal perspective”.

Speaking on Sunday, Mr Donnelly said he wanted to see a “quick engagement with tour operators, with the airlines, to make sure that anybody coming to this country knows what is expected of them when they arrive”.

“We want people knowing when they’re thinking about booking and coming to our country, that they understand that as part of that trip they’ll be expected to self-isolate for two weeks,” he said.

Sources said the Government had also made contact with the main airlines flying into the State about making the completion of an online passenger locator form a mandatory part of booking a ticket on a flight into the country.

However, that step is unlikely to be in place before the planned relaxation of some travel rules on July 20th.

Mr Donnelly said a “green list” of countries people could travel from without undergoing the quarantine would be “relatively short”. The list will be introduced on July 20th. He said a “suite of measures to provide high visibility at points of entry into the country” would also be agreed by the Government in advance and rolled out at the same time.

However, there is growing nervousness among senior health officials about the incidence of cases of the disease linked to travel. At least one cluster of the disease has been linked with inbound travel, it is understood.

HSE chief clinical officer Dr Colm Henry said on Sunday: “Like many of my colleagues, I am increasingly concerned at the ease with which the virus can gain a foothold in the country.”

“The most efficient control measures at airports are a poor second place to people not travelling into or out of the country unless for essential reasons. Everybody should ask themselves before they travel whether the purpose is really essential,” he said.

It is understood that no final decision has been taken on loosening restrictions on pubs that remain shut, and that call will be made at a Cabinet meeting on Wednesday, when up-to-date virus figures will be available.

Separately, Gardaí only received guidance on the enforcement of new face mask regulations on public transport some five hours before they became law on Monday.

At midnight it became compulsory to wear a mask or face covering on public transport except in specific circumstances. Gardaí received guidance on the enforcement of the regulations at 7.30pm on Sunday night.

Until then gardaí said they had been relying on media reports for information on the legislation which was signed by Minister for Health Stephen Donnelly on Friday.

Earlier Dermot O’Brien, interim assistant general secretary of the Garda Representative Association, said its members had “been given no instructions on policing the new public transport regulations”.

A Garda spokesman said the force would “continue its graduated policing response based on its tradition of policing by consent”, with members aiming to “engage, educate, encourage and, as a last resort, enforce”.

She said operators would be led by public health advice, but “we would love to see a clarification on what’s the exit plan from the 14-day self-isolation”.