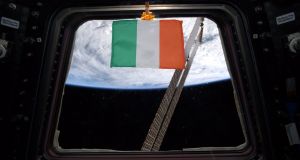 The Irish tricolour floats in a window of the Cupola observatory from where astronauts can observe the Earth. 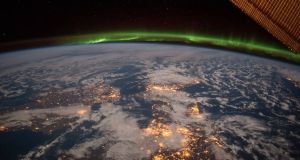 Ireland as spotted from space: with St Patrick’s Day wishes from NASA.

We will live in a virtual world for the foreseeable future, so there was nothing for it only to have virtual St Patrick’s Day parades.

Families and communities around Ireland and abroad improvised their own parades, some of them indoors using toy tractors and cars and any old musical instrument lying around the house. Others ventured outdoors practising social distancing while they marched up and down their streets.

#Virtualparade and #RTEvirtualparade were both trending on Irish Twitter on St Patrick’s Day afternoon. Some of those who posted their videos on social media received a bigger audience than many thought possible.

One of the videos of St Patrick banishing the coronavirus from Ireland went viral, pun fully intended, on the internet on Tuesday.

It was made by the residents of a cul de sac in the Tolka estate in Glasnevin, Co Dublin who decided to hold virtual parades as many of the households have children who need amusing in these lockdown times.

One resident dressed up as St Patrick and the other improvised a coronavirus with a rubber Swiss ball and toilet roll holders painted pink.

“We had a social distancing parade. Each household went up and down the street. It was a bit of craic,” said resident Ciaran Keogh, father of four children between 18 months and eight.

The video took several days to complete and has picked up tens of thousands of views online.

The O’Halloran family in Co Clare had a virtual parade in their back garden with dad David marching around the field followed by their three children.

Their mother Nicola said: “We are trying to keep our days busy. I’m trying to keep things as light as possible for the kids, keep them entertained so they look back on this time as not a scary time.”

In normal circumstances the emergency services would be in the vanguard of the big parade in Dublin.

In the absence of same, the fire trucks at Dublin Airport did a circuit of the tarmac with this comment on the airport’s Twitter account: “Our fire and rescue service normally takes part in the Dublin St Patrick’s Day parade alongside Dublin Fire Brigade. But these aren’t normal times.”

In Raphoe, Co Donegal, renowned local piper Christy Murray staged a one-man parade around the town playing his bagpipes to anyone who wished to listen to them.

NASA astronaut Andrew Morgan, a flight engineer on the International Space Station, explained the tweet further. “Happy #StPatricksDay! This past fall I captured this clear day over the southern end of the Emerald Isle: Limerick, Cork and Kerry counties.”

Morgan also shared a photo of the Irish tricolour floating in one of the windows of the Cupola observatory from where astronauts can observe the Earth.