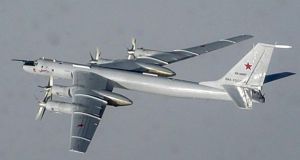 One of the Russian Tupolev TU-95 Bear bombers that entered international airspace controlled by the Irish Aviation Authority off Ireland’s west coast.

Russia is flying bombers into Irish-controlled airspace to test response times by the RAF and other Nato airforces and to “map” radar coverage, according to a former US army commander in Europe.

Retired commander Lieutenant General Ben Hodges, who was the commanding general of the US Army in Europe from 2014 to 2017, said that the Kremlin may be trying to pick at “a seam” that has developed between the Republic of Ireland and the United Kingdom in the wake of Brexit.

It was reported last Friday that, on a third flight mission in six days, two Russian Tupolev TU-160 White Swan strategic bombers flew around the northern coast of Scotland and south along the west coast of Ireland before turning for home in the Bay of Biscay.

Three RAF Typhoon fighters were dispatched from the RAF base at Lossiemouth in Scotland to track them.

Retired Lieut Gen Hodges said he believes the flights are part of Russia’s interest in “mapping out the contours” of radar coverage around the so-called Greenland-Iceland-UK gap, a significant geopolitical and strategic area in international airspace and waters.

Ireland’s status as a non-Nato country could be seen by Russia as “a seam that could be exploited”, he said.

“There is no doubt in my mind that they are doing reconnaissance there. The submarine activity out there is just as much of a concern and for the same reasons,” said Lieut Gen Hodges.

The retired three-star general, who commanded combat forces in Iraq and Afghanistan, oversaw the expansion of US military co-operation with Ukraine after 2014 when Russia annexed Crimea and supported armed rebels in eastern Ukraine.

“They are testing response times and techniques. They do this all around the Black Sea as well as up in the Atlantic and in the Baltic region,” the retired general told The Irish Times.

He added that he expects the Russians to “continue testing to see how we respond, to continue to do reconnaissance, to map out the contours of what the radar coverage is and what can we do. This all goes into their big data effort to use for a rainy day.”

The former officer in command put the expansion of the Russian embassy in Rathgar, south Dublin, down to the Kremlin’s same strategic interest.

“The growth of the Russian embassy in Dublin is not a coincidence. Russia is paying more and more attention to Ireland because of the change in dynamics because of Brexit,” he said.

Were the transponders activated?

Overall, he sees this as part of Russia’s strategy to exploit areas that undermine the cohesion of institutions such as the European Union and Nato.

“All of these institutions and these seams become important because they become weaker for exploitation,” he said.

The Department of Transport has said that other commercial and private flights over the Atlantic had to be warned about last week’s flights as the Russian military aircraft were “unscheduled” and flying without making contact with air traffic controllers.

Lieut Gen Hodges said the Irish Government “should be raising hell” about the Russian flights “in every available venue”, including the United Nations. And he added that the Taoiseach or Minister for Foreign Affairs should be calling the Russian ambassador in to meet them over the incidents.

“They are doing this without their transponders turned on which is incredibly dangerous and reckless,” he said.

Spokeswoman for the Russian embassy in Dublin Victoria Loginova said that bomber aircraft were carrying out a “routine training mission” and these were conducted “in strict accordance to all ICAO [International Civil Aviation Organisation] rules and regulations”.