St Patrick’s Day in Waterford: ‘It was eerie... There were no people on the streets’

With unused festival floats and closed shops, the city had no sign of a day of celebration 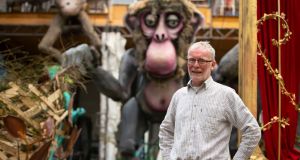 TV Honan, director of Spraoi Studios: ‘It’s like the Mary Celeste in here. All the floats that are meant to be all over Ireland in parades are still here on site.’ Photograph: Patrick Browne

Music is blasting out across a near-empty Sir John Roberts Square in Waterford city, at lunchtime on St Patrick’s Day. The speakers outside Gadget Man are playing two songs on repeat: Don’t Stand So Close To Me by The Police, and Things Can Only Get Better by D:ream.

The music shatters the silence of what must be the strangest St Patrick’s Day the city has ever experienced. “We have to have a bit of humour and keep our spirit up,” says Dean Lavin behind the counter.

There have been a few customers, mostly “people panicking with chargers breaking. We had a lot of people in yesterday, thinking that they should get something now for their child’s birthday in April, just in case the shops don’t reopen”, because of the coronavirus pandemic.

It’s one of the few shops in the city centre which doesn’t have its shutters down and a “Closed Until Further Notice” sign outside. The other is Penney’s.

Apart from the odd tricolour in a window, there is no sign this should have been a national day of celebration. There are several gardaí and only a handful of people on the streets, mostly hurrying along with their heads down. People waiting for the bus stand well over two metres apart. When the buses pull up, they frequently have only a single passenger on board.

Earlier in the morning, as a Dickensian fog settled over the city, Darajane O’Sullivan walked through almost empty streets along the route the parade should have followed.

“It was eerie. There were no barriers set up. There were no people on the streets,” says the communications manager of the Waterford St Patrick’s Day Parade.

The news that the parade was off was not unexpected. “It’s the right thing,” O’Sullivan says.

But that doesn’t lessen the blow. “We were ordering shamrock until an hour before the call came. Months of planning go into it. Apart from the economic effects, everyone puts their heart and soul into what they produce,” she says.

TV Honan is surrounded by floats that should have had their debut in festivals around the country today in the Spraoi Studios on the outskirts of the city. “It’s like the Mary Celeste in here. All the floats that are meant to be all over Ireland in parades are still here on site.”

But he’s looking on the bright side. His spirits were lifted earlier when he got a video of his grandson, Austin Grubb, making his own miniature parade at home with his toys. “It’s been a bit of a downer. But at least one of our family got to be involved in a parade this year.”

The Granville Hotel on Meagher’s Quay should have been enjoying a double celebration of the national holiday and its 40th birthday on St Patrick’s Day. Instead, a meeting was called the day before to let staff know the hotel is closing until further notice.