Extreme temperature events in Dublin up 20% in eight years 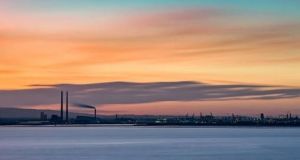 Analysis of 40 years of Dublin’s temperature records shows extreme temperature events have increased by up to 20 per cent in just eight years.

The findings have implications for public health, and indicate how climate change will impact on the capital in coming years.

Researchers from Maynooth University and University College Dublin (UCD) have for the first time produced a complete picture of the behaviour of extreme temperature events across the Dublin region – the study was funded by the EPA.

The scientists examined temperatures which would be considered extremely warm relative to the time of year and location at which they occurred. These ranged from 13 degrees in December and January, to more than 30 degrees in July.

Extreme weather can cause serious public health issues; the 2019 heatwave was estimated to have caused 900 extra deaths in England.

It can also cause serious economic damage to agriculture, industry and transport, as well as to energy and water infrastructure.

The 2011-2018 period showed a large rise in the number of temperature extremes compared to 1981-2010. The researchers developed a technique for measuring extreme temperatures which allows scientists to benchmark against the size and occurrences of future extreme events, using a newly-created data set generated by Met Éireann’s head of climate and observations Séamus Walsh.

The extreme temperature increases varied across Co Dublin, with Casement Aerodrome having 20 per cent more extreme events, and Phoenix Park 7 per cent compared to a baseline period of 1981-2010.

Their study published in the journal Environmetrics shows 20 per cent more extreme weather events occurred between 2011-2018, when considered against baseline temperatures expected in an unchanging climate.

Lead author Dr John O’Sullivan, who is based in UCD, said the new approach enabled them to generate “a climate snap shot”, and led to very surprising results.

“We were able to combine mathematical methods with new ideas in data analytics which enable us to look at how extremes change across the entire Dublin region.”

Extreme temperatures across the world are soaring. The Netherlands and Belgium recorded their highest ever temperatures of 38.8 degrees and 39.9 degrees in July 2019, and a new record of 41.9 degrees was set in Australia last December – resulting fires were identified by scientists as consistent with global heating.

“This analysis is state of the art in terms of the combination of mathematics, data science, statistics and climatology,” said Prof Andrew Parnell of the Hamilton Institute and the SFI insight centre for data analytics at Maynooth University.

He said there was an ever-increasing imperative to look at trends indicating cause and potential solutions to climate disruption issues at a local, national and global level.

“With ambitious climate-change targets set for 2030, Ireland should be a major player in climate-change research, but currently we lag behind in investment and are bottom of the league table in climate action.”

He said publication of this research with the help of EPA funding would, however, enhance Ireland’s reputation in climate science.

Co-author Dr Conor Sweeney of UCD Earth Institute said: “We are the first group to use this new data set to characterise extremes. We hope that this analysis provides a marker on which others can build to provide a complete picture of how climate change is affecting Ireland.

“We only have a complete climate data set up to 2010. More work is needed to complete the analysis so as to measure the rate at which extreme temperatures are increasing across Ireland.”