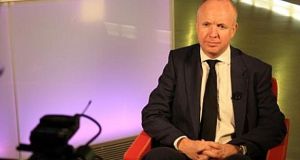 Fergal Gaynor said he is deeply honoured by the appointment to the tribunal. File photograph: Photograph: Clara Sanchiz

An Irish barrister has been appointed to one of the most senior prosecution positions at the Cambodia Tribunal in Phnom Penh, set up in 1997 to try leaders of the Khmer Rouge who ruled the country between 1975 and 1979.

Fergal Gaynor (48) has been appointed Reserve International Co-Prosecutor at the tribunal after being nominated by UN secretary general Antonio Guterres and approved by King Norodom Sihamoni. The tribunal is run jointly by the Cambodian government and the United Nations.

Because of its hybrid structure, the tribunal has a senior legal staff comprising national and international prosecutors and judges.

Mr Gaynor will stand in as required for current international co-prosecutor Brenda Hollis. She is an American lawyer who was previously chief prosecutor at the UN’s Special Court for Sierra Leone, which jailed former Liberian president Charles Taylor for 50 years in 2012.

He was lead counsel for the victims in the ICC case against Kenyan president Uhuru Kenyatta between 2012 and December 2014 when charges were withdrawn due to lack of evidence.

Most recently he has represented 82 victims in hearings related to the controversial ICC investigation into alleged mass killings by the Taliban, allegations of torture by US forces including the CIA; and Afghan troops in Afghanistan between 2003 and 2014.

Mr Gaynor was born in Malawi, southeast Africa, where his father, Frank, was a teacher with the Kiltegan Fathers. His father and his mother, Monica, hail from small farming backgrounds in Co Westmeath.

He is a graduate of Trinity College Dublin and Cambridge University and is also a member of the Bar of Ireland. Mr Gaynor said he is deeply honoured by the appointment to the tribunal which had made “an enormous contribution to the pursuit of justice for the millions of Cambodian victims who suffered and died during the Pol Pot regime”.