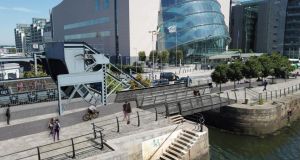 The proposed new design for the pedestrian bridges over the Royal Canal where it meets the Liffey Photograph: Dublin Docklands

Dublin City Council is planning to provide two lightweight steel bridges over the mouth of the Royal Canal, one for pedestrians and the other for cyclists.

Both bridges will be 12 metres long and will cross the mouth of the Royal Canal where it meets the Liffey.

The bridge closest to the Liffey will cater for pedestrians, while the second, cycleway bridge will be closer to the protected Scherzer lifting bridges which move with the aid of counterbalances to allow clearance for access by water.

Dublin City Council said the new bridges will connect the existing pathway on the quays. Currently there is room only for one pedestrian at a time to cross the canal on narrow bridges either side of the Scherzer bridge, a fact which the council says drives pedestrians into the roadway.

The scheme will require repaving and some works on both sides of the canal, to address level changes and removal of a number of trees to the west of the bridges to allow for a safe approach and the segregation of cyclists and pedestrians. New trees are to be planted nearby.

The stretches of land between the quay and road on both the north and south quays in Dublin were previously known as campshires.

They were so named because various British military regiments, such as the Gloucestershires or Leicestershires, would camp there before setting off or returning from duty, making campshire a mix of camp and shire.

In a further move work on installing a new bridge across the Liffey from the Irish National War Memorial Gardens at Islandbridge to Phoenix Park, is to go ahead.

A bridge was originally intended to be part of Sir Edwin Lutyens’s design for the gardens, but was never built. Now the Office of Public Works and Royal Institute of the Architects of Ireland have invited designs for the structure, with a deadline of next March, the 150th anniversary of Lutyens’s birth.