Abortion law may be held up by the Seanad 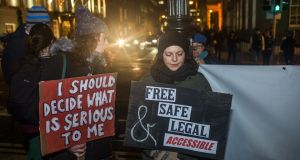 A protest outside the Dáil demanding the right to free and safe legal abortion. Photograph: James Forde

A large number of amendments have been submitted for the Seanad debate on abortion legislation that begins today, threatening Government plans to have it on the statute books by Christmas.

More than 60 amendments have been put down to the Regulation of Termination of Pregnancy Bill, which passed through the Dáil last week after lengthy debates over several days and a late-night vote.

The Bill passed its first vote in the Seanad last Thursday by a margin of 30 votes to three. However, Senators will now begin the process of debating the details of the Bill, with the House meeting today for an unusual Monday sitting.

Once the committee stage is passed, the Bill will then reach is report and final stage, during which further amendments can be tabled.

However, the Government is optimistic that the Bill can pass the Seanad this week and be signed into law by the President, thus allowing abortion services to be legalised by January 1st.

However, for that to happen, it will have to come out of the Seanad this week unamended.

Minister for Health Simon Harris will not accept any further amendments to the Bill. However, political sources say there may be a majority in the Upper House for pro-choice amendments.

If the Bill is amended by the Seanad, it must return to the Dáil for those amendments either to be accepted or overturned.

If it passes the Seanad this week, it will go to President Michael D Higgins to be signed into law.

Once that happens Mr Harris must sign six statutory instruments to bring the legislation into operation, which he would likely do over Christmas.

The majority of amendments put down for the Seanad debate are from the pro-choice side, though the Government is hopeful that Senators will not press many of the amendments to a vote so that passage of the legislation can be extradited.

However, there are also a number of substantive amendments from anti-abortion Senators, including Rónán Mullen, Brian Ó Domhnaill and Paul Coghlan, on issues such as pain relief for the foetus, the “disposal of foetal remains” and the “protection of infants born alive”.

Amendments on these and other subjects proposed by anti-abortion TDs have already been rejected by the Dáil, in what were frequently fractious debates last week.

Several anti-abortion TDs rejected accusations of that they were seeking to filibuster the Bill, pointing out that more time was being taken up by pro-choice speakers in the debates.

It is understood that the Government side will suggest to pro-choice senators they should keep their contributions as short as possible during this week’s debates.