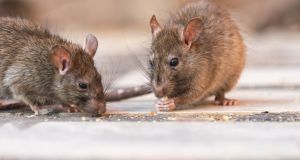 Evidence of rodents gnawing at bread packaging was uncovered at a Tesco store in Carrick-on-Shannon, Co Leitrim. Photograph: Getty Images

Evidence of rodents gnawing at bread packaging was uncovered at a Tesco store in Carrick-on-Shannon, Co Leitrim when food safety inspectors went to the premises after receiving a consumer complaint.

Tesco Ireland Ltd was among 13 food businesses served with closure orders last month for breaching food safety legislation, according to the Food Safety Authority of Ireland. Inspectors said there was evidence of a “significant” rodent infestation at the premises, which posed a “serious risk to public health”, in a report of their visit on November 6th.

Tesco Ireland said that following a report from a customer in the store, a “pest issue” was identified.

“As is standard a temporary closure notice was issued on the evening of 6th November. We immediately arranged for a pest control company to carry out a thorough inspection and the store reopened at 3.30pm the following day, with all appropriate measures taken,” a spokeswoman said.

She said Tesco operated “to the highest health and hygiene standards and regrets this issue arose and inconvenienced customers”.

A closure order was also served by HSE environmental health inspectors on O’Brien’s Gala shop at Tulla Road in Ennis, Co Clare after inspectors found evidence of “a significant number of rodent droppings and gnawed foodstuffs and packaging” at the shop, indicating a “serious rodent infestation”.

Everest Express Fish & Chips Takeaway on Tulla Road, Ennis, was also served with a closure order due to a serious rodent infestation.

The New World Thai and Chinese Takeaway at 275 Glasnevin Avenue, Glasnevin was also served with a closure order after inspectors found chopping boards in the kitchen “filthy with ingrained dirt” and “defective, worn and filthy” cleaning equipment in the kitchen.

In Co Kilkenny, the Blue Door restaurant at 59 John Street was served with a closure order when inspectors found the internal and external surfaces of refrigerators and freezers showing evidence of rust, mould and dirt. Food on the premises was stored in “broken containers and cardboard boxes which were covered in grease and dirt”, the inspection report said.

There was also a build-up of ingrained dirt and food debris on surfaces including floors, walls, ceilings, doors, equipment and other hand-contact surfaces.

In one premises, they found boards in a kitchen with “multiple dead and live cockroaches” on them.

Orders were also issued for a failure to segregate raw and ready-to-eat and cooked foods during storage and for not declaring nut allergens on a menu.

FSAI chief executive Dr Pamela Byrne said food businesses must operate strict food safety procedures at all times and that they needed to be extra vigilant during this busy time of year.

“Fourteen enforcement orders in one month is an unacceptable number. The reasons for the enforcement orders having to be served are all easily preventable in the first place and food businesses should not allow their standards to slip,” Dr Byrne said.

“All food businesses must ensure that they adhere to a high standard of food safety and hygiene at all times. It is also imperative that a proper pest control system is in place and that this is checked very regularly in order to avoid infestations of rodents and insects.”

One prosecution was taken by the HSE in November in relation to Cissie’s Farm Shop, Ardnawark, Barnesmore, Donegal town.

Further information on food safety and on the enforcement orders is available on the FSAI’s website at fsai.ie.