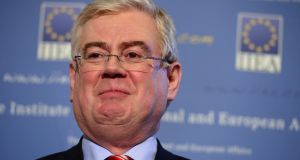 Tánaiste Simon Coveney has nominated a predecessor as Minister for Foreign Affairs, Eamon Gilmore, to head up the EU’s human rights monitoring and advocacy operation.

Mr Gilmore, the former Labour Party leader and tánaiste, was formally proposed at Monday’s meeting of foreign affairs ministers for the full-time, Brussels-based post due to be filled by February.

Irish diplomatic sources were cautiously optimistic he would succeed, although other potential candidates have yet to emerge. Mr Gilmore’s political and foreign policy experience will serve him well, and his work over the last three years as the EU special representative to the Colombian peace process has been well-regarded.

Mr Gilmore has travelled regularly to Bogotá where, Irish officials say, he has brought particular insights from the Northern Ireland peace process. The position is based in Ms Mogherini’s European External Action Service, the union’s diplomatic wing.

The independent post was created in 2012 in response to long-standing calls for a representative to take charge of enhancing the effectiveness and visibility of human rights policy, based on the EU Strategic Framework and Action Plan on Human Rights and Democracy.

The representative has a mandate to promote the strengthening of democracy, international justice, humanitarian law and the abolition of the death penalty. Its current incumbent, Stavros Lambrinidis, whose mandate from September 2012 was extended to February 2019, is a Greek lawyer and politicianwho was also his country’s foreign minister.

Mr Gilmore is a former student leader who went to work for the then Irish Transport and General Workers’ Union (now Siptu) before entering politics as a member of Sinn Féin, the Workers’ Party which eventually merged with Labour.