Abortion services may not be in every hospital in January - Varadkar 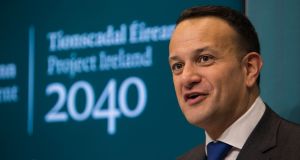 Taoiseach Leo Varadkar said the rollout of abortion services was not a case of ‘just flicking a switch’. Photograph: Collins

Abortion services will be rolled out on a phased basis from January 1st and terminations of pregnancy will not immediately be available in every hospital, Taoiseach Leo Varadkar has said.

Speaking in Dublin on Monday, Mr Varadkar said introducing abortion services was not just “a case of just flicking a switch”.

Following the Yes vote in May’s referendum on repealing the State’s constitutional ban on abortion, the Government insisted terminations would be available from the start of next year. However, a number of doctors and maternity hospitals have warned in recent weeks that the timeframe for establishing the service may be too tight.

The legislation, which would see the introduction of legal abortion inside the first 12 weeks of a pregnancy, is yet to be approved in the Oireachtas but the Government hopes the President will sign it into law before January.

Once that happens, Minister for Health Simon Harris must sign six statutory instruments to bring the legislation into operation, which would likely happen over Christmas.

However, the Taoiseach on Monday gave one of the first indications that the rollout of abortion services may take longer than initially envisaged.

“I am confident that the service will be available in January,” he told reporters. “Obviously there are a number of contingencies. The legislation has yet to go through the Seanad. If it is amended in the Seanad, it will may have to go through the Dáil and then of course, the President always has it within his prerogative to refer it to the Supreme Court. ”

Mr Varadkar added: “There are number of dependencies there. But assuming the legislation is enacted and signed into law by the President, the service will be available in January.

“But like any new service, it is not going to be a case of just flicking a switch and on one day there is no service and on the next day it is 100 per cent available. It will have to be rolled out, it will have to be phased in.

The committee stage debate on the Health (Regulation of Termination of Pregnancy) Bill 2018 is continuing in the Seanad, where Mr Harris told senators he agreed with the Taoiseach’s view that it would take time for abortion services to be fully available.

More than 300 women, on average, leave the State each month in order to get a termination and Mr Harris said that in January these women would “have access to services in their own country”.

The Minister said he was very happy to see the level of preparedness people have put in with websites, information campaigns and help-lines to support and provide care and compassion in Ireland to the 372 women “who will seek a termination in January regardless of what we do with the law, because we know nine travel every day and three take the abortion pill”.

Independent Senator David Norris had asked if the Minister was aware of Mr Varadkar’s comments on services not being fully available by January 1st.

He replied that “the Taoiseach is entirely correct” and had “truthfully pointed out that it takes time for services to embed and evolve and be fully implemented”.

Independent Senator Brian O Domhnaill said that regardless of the Taoiseach or Minister’s comments, the remarks of the practitioners who are due to provide these services “are in stark contrast to what the Taoiseach and you Minister are saying today”.

He added that Dr Austin O’Kennedy, a renowned medical practitioner, had outlined clearly on the record that it would be highly absurd to proceed with this legislation on January 1st”.