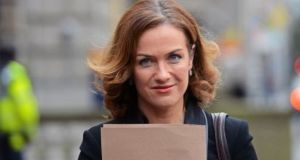 Dr Rhona Mahony said it was unfortunate that a lot of people thought nuns were going to be running the new facility. File photograph: Eric Luke

The outgoing master of the National Maternity Hospital has said there will be no religious involvement at all in the proposed new maternity hospital on the St Vincent’s campus.

Dr Rhona Mahony, who finishes her term in Holles Street on January 1st, said it was unfortunate that a lot of people thought nuns were going to be running the new facility.

A demonstration will be held on Saturday on Dublin’s O’Connell Street, calling for the new National Maternity Hospital to remain free of any overriding religious ethos.

However, Dr Mahony said it was time people accepted the factual position.

“Telling women stories that this hospital will be run by religious sisters is really damaging. It frightens women because they may believe that services for them will be restricted in terms of not providing termination of pregnancy, not providing contraception, when in fact the opposite is the case.

“When we move to this new hospital, the expansion in services available to women will be revolutionary.”

Dr Mahony said the Sisters of Charity, who own the St Vincent’s campus, have given the land for the new maternity hospital free of charge and are getting out of Irish healthcare.

She stressed there will be no religious interference “whatsoever” and that canon law will be “irrelevant” to the ethos of the hospital.

The €300 million facility is a joint operation between the National Maternity Hospital in Holles Street and St Vincent’s Hospital.

It will be situated on the site of St Vincent’s Hospital and will be operated under a National Maternity Hospital company under a licence granted by the HSE.

However, the contracts which will allow the commencement of work have not been signed and will need to be signed by December 31st.

The contracts have to be signed by that date because new EU building regulations come into effect on January 1st for publicly-run facilities.

Dr Mahony warned that a failure to agree contracts by that date could see the project delayed as plans would have to be redrawn.

“You could have big delays and there will be a cost,” she said.

Dr Mahony explained that the enabling works had already begun on site, but the Department of Health needed to sign the contracts to allow the car park and new pharmacy to be built.