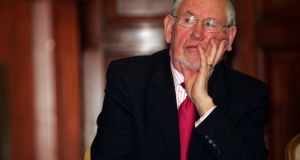 A joke has been doing the rounds in recent weeks that across the country prominent women were afraid to answer the phone in case it was the organiser of the MacGill Summer School inviting them to attend.

In the wake of the controversy surrounding the lack of women at this year’s event, the school’s founder and director, Joe Mulholland, went into damage control mode.

He sat down with two female journalists and went through the programme line by line. Names like David Quinn of the Iona Institute and Eamon Ryan of the Green Party were crossed out and replaced with women such as the communications manager for the Together For Yes campaign, Amy Rose Harte, and broadcaster Sarah Carey.

Mulholland was reluctant to dump some of the men, most of whom had been coming to MacGill for years. But his advisers pointed out that some were speaking at more than one panel. “If they’re speaking on loads of different topics it means they don’t have anything interesting to say about any of them,” he was advised.

New panels were also added on gender representation and the Eighth Amendment. In the end it did the trick. The outcry had largely died down by the time the event began last Sunday.

However, looking at the crowd which gathered to hear the sessions in the large hall adjoining the Highland Hotel this year, it’s hard to avoid seeing another, more existential crisis for MacGill which will not be so easy to fix. To put it indelicately, these people are old; an unscientific estimate puts the average age at probably 60-plus.

The vast majority have been here before, usually many times. Some plan their holidays around MacGill . One Donnybrook couple complained how they nearly did not make it as they had trouble finding a dog-sitter for their three Shih Tzus.

One couple in their 20s, however, did make the trip – an occurrence so unusual that it became a main topic of conversation: “It’s definitely more Birkenstocks than Woodstock, ” one MacGill veteran joked.

The age profile might also explain the lack of Government politicians. In the past most of the Cabinet would attend, using the opportunity to test drive new ideas away from Leinster House.

If they were not well-received in Glenties in the last days of July, the politicians could then just abandon them as having been merely an exchange in the marketplace of ideas.

Attendees reflect, with a glint in their eyes, on more vibrant times. such as when then minister for finance Brian Lenihan addressed the crowd in 2009 in his shirt sleeves with sweat pouring from his brow.

It was 2009, the country was on a cliff-edge and Lenihan was using the summer school to lay out his plans to avert disaster after the economic crash.

Then there was the time in 2012 when Phil Hogan, then the minister for the environment, was chased around the back of the hotel by a water charges protester dressed as Spiderman.

This year, just one Cabinet member attended, Minister for Foreign Affairs Simon Coveney, who arrived after attending an event in Derry. Sunday at MacGill has always been known as the Taoiseach’s night.

It was not long ago that Enda Kenny kept everyone up until the small hours in the bar, buying round after round for the house. This year former taoiseach Bertie Ahern filled that role.

Ministers used the excuse that a Cabinet meeting was taking place on Wednesday but that has not stopped them attending before. In one previous year, Minister for Finance Paschal Donohoe managed to attend a Cabinet meeting in Kildare the morning after a very late night in Sonny’s Bar, up the road from the Highland.

The lack of Government members could also be down to Fine Gael’s media management strategy which has seen Ministers becoming less available to the press in recent years.

Indeed MacGill has been associated with embarrassing moments for politicians. In 2010, minister for transport Noel Dempsey was severely criticised for taking the government jet to MacGill at a cost of €13,000. Today, every politician drives or is driven.

The dearth of big names has resulted in dwindling media interest. Previous years have seen up to 20 reporters at the sessions. This year there are four reporters at the event – RTÉ and the Irish Independent declined to send anyone, preferring instead to report on the sessions by watching them over a webstream.

There’s even less interest from the locals. Although everyone welcomes the financial benefits of the school, and it is a boon to Glenties even during July, few actually attend the sessions.

In the Tavern Bar up the road, one man who goes by the name “Tasche” admits he has never attended. “I’d have no interest in that shite.”

The criticism levelled at this year’s speakers that they are “pale, male and stale” might be harsh, but it is not entirely wrong.

This is the Ireland of the political centre talking to itself. Many sessions are filled with worried talks about the growth of populism on the far left and far right but there are few here from those movements to explain them.

“I’ve no issue with them being invited in principle,” Cox told The Irish Times. “It could make for an interesting discussion if they would come.”

Mulholland, who has made a considerable contribution to Irish public debate, has acknowledged he needs a younger audience. Next year he plans to recruit a young researcher to help him recruit a wider variety of speakers.

Whether that will bring back Spiderman, RTÉ and the Taoiseach remains to be seen.