Taoiseach expresses confidence Brexit deal can be sealed before March 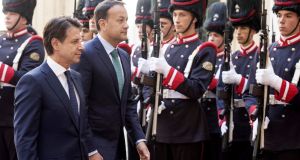 Taoiseach Leo Varadkar has expressed confidence in the wake of his visit to three European capitals that a Brexit withdrawal agreement can be reached by October and ratified before March.

Mr Varadkar was speaking in Rome after meeting Italian prime minister Giuseppe Conte on the final day of his European Union whistle-stop tour.

“My sense from visiting three capitals here over the last couple of days – having met the prime ministers of Italy, Romania and Croatia – is that they very much have Ireland’s back, very much understand our concerns, very much [are] on our side,” he said.

He said Mr Conte was “very well briefed on Brexit and understood our concerns and is extremely supportive of our position around there not being a hard border”.

The Italian prime minister was also “very much supportive of the work of the Barnier task force and that was very reassuring, that level of support”.

At the prime minister’s palazzo in Rome, the infantry brigade of the Italian army, the Granatieri de Sardegna, performed Amhrán na bhFiann as the Taoiseach arrived for over an hour of talks.

Mr Varadkar told reporters after the meeting: “I am confident that we will able to come to a withdrawal agreement that includes an Irish protocol [no hard border] in October and I am confident that it will be possible to get that ratified by Westminster and the European parliament before March.”

He added: “I am confident that we will achieve what we are setting out to achieve but we do have to be wise to the possibility that it may fail.

“There’s lots of different reasons as to why things might go wrong, not in Ireland or in Europe but even potentially in London and that’s why we have to prepare for all eventualities.”

Welcoming the support and solidarity of the three prime ministers he said they were “also looking to us for solutions and that’s what we need to do over the weeks ahead”.

He said they would work to “come up with solutions that everyone can live with”, knowing that “we have strong European solidarity behind us and the 27 member states are with us”.

The Taoiseach said he had met Mr Conte once before briefly when the new Italian prime minister arrived in Brussels.

“But this was as really good chance for our teams to meet for over an hour and to really get into the detail of some of the issues and some of the questions that we face.

The two men discussed migration and Mr Varadkar “restated our offer which we had made to the previous government to take 600 migrants”.

He said: “It wasn’t possible to do that even though we committed to it probably two years ago because we couldn’t agree Garda vetting and security clearance.

“But I restated our offer to take 600 if we could agree on appropriate security clearance and we agreed to engage further on that.”

The Taoiseach visited the headquarters in Rome later on Thursday of Operation Sofia, the EU mission in the Mediterranean in which the Irish Naval Service participates.

The Italian prime minister had thanked the Taoiseach for the State’s recent agreement to take 20 migrants from the boats that docked recently in Italy after being refused entry in other EU member states.

The Taoiseach said both leaders agreed migration had to be a European-wide issues “because any individual country acting on its own just passes the challenges and problems on to the next country and we’re very much of the view that we must have an EU-wide solution”.