'It’s not my first day in an aircraft': Aer Lingus pilot in tetchy row with air traffic controller 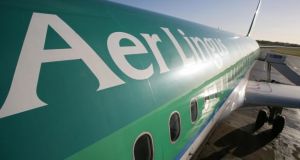 An Aer Lingus pilot came under pressure earlier this week after a tetchy exchange with an air traffic controller mid-flight.

The pilot was flying passengers from John F Kennedy Airport in New York City to Dublin on Sunday, July 22nd when the air traffic controller radioed the cockpit citing a potential threat to the aircraft.

The Aer Lingus plane referred to as “Shamrock 104 Heavy” throughout the recording had gone down the runway southwards, and was intending to turn left across the Atlantic and towards Ireland.

The pilot saw a storm upon take off to his left that he deemed unsafe and so carried on straight to await further instructions.

While the pilot thought the storm was unsafe to fly through, the air traffic controller became agitated telling the pilot no other aircraft had deviated from the requested course.

The audio of the conversation, which was posted online by YouTube users Dublin Aviation, records over three minutes of tense discussions in which the two men argue over whose judgment is correct.

“You’re on the runway and you’ve taken a clearance and accepted a departure clearance and you’re seeing that weather straight ahead on a runway and everybody off that airport is turning left. I mean there’s not too many options here in New York,” the air traffic controller says.

The pilot can be heard explaining that he is best qualified to fly the plane and wants to ensure the safety of passengers, with his voice becoming increasingly agitated as he tries to keep his cool.

The pilot explains the Aer Lingus flight had to spend almost an hour circling over New York before it ever got to start on the correct path.

“And before I go, we didn’t create any situation, we flew the aircraft in a safe manner and my boss will be in contact with your boss. Good day,” the pilot says.

The air traffic controller replies that every other plane has been turning left: “Everybody on the airport is turning left. I mean, there’s not too many options here in New York.”

The conversation ends on a sour note with pilot saying the situation was beyond his control.