Orders mark Battle of the Boyne – and of the Bug – ‘online, in your home or at your door’ 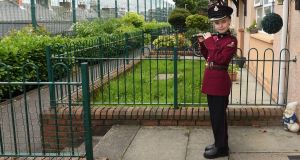 Ten-year-old Jonathan Thompson is the youngest flute player with the William King Memorial Flute Band. He is practising outside his home in the Fountain in Derry. Photograph: Trevor McBride

As the newest – and youngest – member of the William King Memorial Flute Band, 10-year-old Jonathan Thompson should have been looking forward to marching in his first Twelfth of July parade.

Instead, like many bandsmen and members of the Orange Order in Northern Ireland and in the Republic, he will be celebrating the “Twelfth” not by marching through the streets, but by staying at home.

This year, the Grand Orange Lodge of Ireland is taking on the “Battle of the Bug”, as its social media campaign puts it, as well as marking the anniversary of the Battle of the Boyne. “It was clear from the medical evidence and what the [northern] Executive was saying, crowds spread coronavirus, and the biggest crowds on the street in Northern Ireland are for the Twelfth of July,” says the grand secretary of the Orange Order, the Reverend Mervyn Gibson.

Instead, the call is to celebrate “online, in your home or at your door”, although, in another anomaly this year, because it falls on a Sunday, the Twelfth will instead be celebrated on Monday 13th.

A four-day virtual programme of events is on the order’s website, and a new radio station, Radio Boyne, will broadcast music, speeches and services.

“It definitely won’t be the same,” says Kyle Thompson, the district master of the City of Londonderry No 4 Loyal Orange Lodge. “It is a bit disappointing, but over the last few months we haven’t been able to do all the things we would normally do, and it’s for the greater good. It’s the way it has to be.”

Just as for his younger brother Jonathan, the Twelfth has been part of Kyle Thompson’s life since he was a child. “It’s the cornerstone of the culture and history of our community and a celebration of our civil and religious freedoms, but it’s also a family occasion when people come together. There’s nothing else in the world like it.”

Derek Moore agrees. “How do you do a virtual Twelfth?” he laughs. “It’s pretty difficult.” A senior member of the William King Memorial Flute Band, he is also co-ordinator of the North West Cultural Partnership, which runs the New Gate Arts and Culture Centre in Derry’s Fountain estate, the last remaining Protestant area on the city’s west bank.

Under normal circumstances, it runs a two-week festival each summer. This year, the New Gate Fringe festival team have put together a series of short films exploring how the Twelfth will be celebrated in Derry and Strabane. Other local events include an online Twelfth hosted by the nearby Sollus centre, in Bready, Co Tyrone.

More than 200 bands have made applications to the Parades Commission to hold small, socially distanced parades of no more than 30 people – the maximum number currently allowed to gather outside under the coronavirus regulations in force in Northern Ireland – in their local areas. But the bandsmen of the William King have decided to stay at home.

Cancellation was “totally the right decision”, says Moore. “The pandemic is not over, and there’s no way anybody should be on the streets. I’m married to a nurse, so I know.

“I understand people wanting to get out,” says Moore, “but we couldn’t control anything outside of the band, and we didn’t want to put anybody at risk. On the road you risk pulling a sizeable crowd along with you.”

He also had concerns over how the band would play their flutes safely. “Flutes could be the biggest spreader [of coronavirus]. There’s no such thing as social distancing for a flute. It’s a wind instrument which requires volume of sound.”

In Newbuildings, Co Derry, the Pride of Orange and Blue Flute Band will play in their local area. “People are set up to sit in their own home and wait for the band to come to them,” explains the band’s president, Kenny McFarland. He is confident the public will stay at home. “This is bringing the band to you.”

Other events to encourage people to stay indoors have also been organised, including a competition for the best-decorated house. “There are more houses decorated with flags, and there’s a bit of a buzz about the place now,” says McFarland.

“When it was cancelled people weren’t happy. They didn’t know what to do, because nobody has any expectation of not having the Twelfth. But once the rules moved to 30 people, that gave the bands an opportunity. People want to see and hear bands on the Twelfth.”

The number of bands applying to march rose following the controversy over the funeral of former IRA member Bobby Storey in Belfast on June 30th, which appeared to break both social-distancing guidelines and the coronavirus regulations.

Work also restarted at some bonfire sites in east Belfast, which had previously been cleared of wood following an agreement to call off the bonfires traditionally held on the Eleventh Night, though at least one of these sites has subsequently been cleared.

“My line has been, why repeat bad behaviour? If we’re saying that’s wrong, why would you want to repeat what’s wrong? I think it [the Storey funeral] was a disregard for people’s health as much as anything else, and we don’t want to repeat that mistake,” says Gibson.

He believes the majority will follow the rules. “No doubt there’ll be examples, people will say that was done, this was done, but I think the intent of the institutions and the bands and the wider unionist community is to celebrate within the regulations.”