Gardaí out in force this weekend amid worrying coronavirus trends 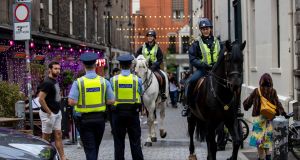 The Government is considering delaying the reopening of pubs that do not serve food beyond July 20th amid growing concern about a second wave of Covid-19 infections.

Senior sources said the Cabinet will meet next Wednesday and take a final decision on the matter following input from the National Public Health Emergency Team (NPHET).

Industry sources believe the reopening of pubs that do not serve food could be delayed until after the August bank holiday weekend but a Government source said no decision had yet been made.

Gardaí are to maintain a high-visibility presence in cities and towns this weekend in an effort to prevent a repeat of widespread breaches of coronavirus regulations seen last week.

With good weather expected over the weekend and signs of an increase in Covid-19 infection rates, gardaí are eager to prevent large indoor and outdoor gatherings in contravention of public health advice.

However, the force’s powers remain limited. Gardaí can shut premises for certain breaches of the restrictions but others, such as the mandatory serving of a substantial meal in pubs, remain only guidelines.

In a statement on Friday, the Garda also issued a reminder that it has the power to object to the renewal of publicans’ licenses.

It said customers also bear a responsibility for adhering to the guidelines and keeping their families safe.

Operation Navigation, which began last week, will see almost 3,000 licensed premises being inspected this weekend. Local Garda management across the country have been instructed to inspect all open pubs in their area.

“In addition, as part of ongoing patrolling relating to Covid-19, An Garda Síochána will have a high visibility presence in key locations in cities and towns to ensure the public are adhering to the public health guidelines,” a spokesman said.

A large number of gardaí could be seen on patrol in Dublin city centre on Friday evening, including around Dame Lane where large groups of drinkers gathered last weekend.

In Portobello and along the Grand Canal gardaí were making some drinkers pour out their pints before telling them to disperse.

This week prosecutions were initiated against 26 pubs suspected of breaching the health regulations or licensing laws. The Garda said these pubs had been given an opportunity to “rectify the situation” but they failed to do so.

By failing to adhere to the regulations, pubs “are putting themselves, their employees, their customers and the wider community at risk of getting Covid-19. We would hope that lessons have been learned and we see an even higher rate of compliance after this weekend,” Deputy Commissioner John Twomey said.

“In addition, customers of licensed premises engaged in such practices also have to take personal responsibility. By using a premises that is not in compliance with the public health regulations and has not taken on-board the public health advice, those customers are also creating a risk to themselves, their family, their friends and the local community.”