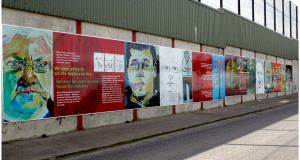 Belfast Interface Project director Joe O’Donnell said: “I do not see the wall that runs between the Shankill and Falls being removed in six years.” Photograph: David Sleator

A Stormont commitment to “reduce, and remove, all interface barriers” in the North by 2023 is in doubt after it emerged nearly one in five of the 116 peace walls were not included in the plan.

The pledge to remove the walls between unionist and nationalist communities was part of the May 2013 Together Building a United Community strategy.

The strategy was agreed by Sinn Féin and the DUP following street protests and violence that erupted after a December 2012 decision to restrict the flying of the British flag over Belfast City Hall.

Its publication came a month before a visit by then US president Barack Obama who told an audience at Belfast’s Waterfront Hall that removing the peace walls, “more than anything, will shape what Northern Ireland looks like 15 years from now and beyond”.

Experts predict many of the barriers are likely to remain in place beyond 2023, while the Belfast-based media project Detail Data found that 21 structures are not even included in the Stormont target.

Detail Data is a partnership between the Northern Ireland Council for Voluntary Action and The Detail news website.

The Executive Office at Stormont, when asked for an update on the interface removal project said the exact number of interface barriers is subject to differing views as a result of varying approaches to counting and categorising barriers. Its target covered barriers owned by the North’s Department of Justice and Housing Executive, which was found to represent 74 structures.

“Progress has been made but this isn’t simply a numbers game, where we take down a wall and move on,” it said.

“...We are committed to reduce and remove all interface barriers by 2023”

A forthcoming report by the Belfast Interface Project, which draws on information gathered by academics and researchers at the Institute for Conflict Research in Belfast, identified 116 defensive walls, fences, gates and buffers in Belfast, Derry, Lurgan and Portadown.

In the project’s report the department and housing executive’s figure of 74 structures is made up of 95 separate components. This is due to differences in how structures are identified and catalogued, with some ranging from walls stretching hundreds of metres to large planters and gates. In other cases, barriers are made up of intermittent sections of wall or fence which could be counted as a single peace wall or as multiple structures.

Analysis of the data reveals 21 structures will remain in place even if the Stormont target is achieved. These outstanding structures are controlled by organisations including Belfast City Council, Invest NI, Belfast HSC Trust, the Department for Infrastructure and private and unknown owners.

The Executive Office did not address how the commitment to remove all barriers by 2023 could be met, given such omissions.

Belfast Interface Project director Joe O’Donnell said he does not believe that many of the barriers can or will be removed in such a short timeframe.

“I do not see the wall that runs between the Shankill and Falls being removed in six years,” he said. “I don’t think it is particularly important if we miss the target date of 2023. I’m not sure now in 2017 that anyone considers that we are going to hit that target.”