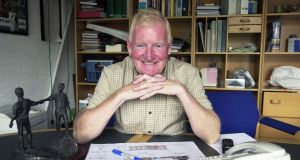 Secret back channels between enemy lines are places of mystery, intrigue and danger, but these are crucial spaces where foes come together and feel their way, slowly and cautiously, to peace.

Between enemies are intermediaries. Brendan Duddy, the Derry fish-and-chip shop owner-turned-businessman who died last week aged 81, was one.

Remembering him, veteran BBC journalist Peter Taylor, who made the 2008 documentary “Secret Peacemaker” revealing Duddy’s role a decade after he had first learned of it, said he had been “driven” to take risks for peace.

Certainly, the seeds Duddy sowed helped grow the green shoots of peace. But there were other gardeners too, including Noel Gallagher, who runs a coal delivery business in Derry.

Like Duddy, he has remained in the shadows. Until now. Today, however, he is keen to explain his role – one that brought him close to former taoiseach Albert Reynolds and successive Fianna Fáil governments.

Gallagher’s contacts went to the top, including with senior British government officials and, on several occasions, British prime minister Margaret Thatcher, he says.

Thatcher even sent gifts in acknowledgment, says Gallagher: a mug with a George Bernard Shaw quote and a painting of a horse. His contacts with Thatcher are confirmed by other sources.

His instructions from the IRA leadership were clear: work with Duddy but under no circumstances divulge details of operations

Gallagher worked closely with Duddy for nearly 35 years because, as he tells it, Duddy was “very, very knowledgeable” about British politics, but “didn’t have a grasp for republican politics”.

He was a childhood friend of Martin McGuinness. His wife and McGuinness’s wife, Bernie were also life-long friends.

His instructions from the IRA leadership were clear: work with Duddy but under no circumstances divulge details of operations. Gallagher kept McGuinness in the loop every step of the way.

“There’s a conception that this was intermittent. This kept going all the time,” said Gallagher of the secret contacts between IRA leadership and the Irish and British government in the efforts to build peace.

Duddy opened up his home up to IRA men and British intelligence agents, such as Frank Steele, Michael Oatley and, later, a man called “Fred” – thought to be intelligence officer Robert McLarnon, if that is his real name.

The IRA men who came included Ruairí O Brádaigh, Seamus Twomey and Belfast IRA commander Billy McKee: “There were people you recognised off the telly – the most wanted men in Ireland, ” says Duddy’s son, Brendan jnr.

The fourth of his six children, Brendan jnr remembers his father trying to teach McKee how to drive on a beach one summer in Bunbeg, Co Donegal, during a trip that masqueraded as a family holiday.

Instead, it was simply cover for Duddy and McKee to talk for hours and hours: “The trust was immense. You are putting your life and your family’s life in the hands of the IRA,” says his son now.

The businessman’s family thought it strange that nobody twigged Duddy’s real identity since the existence of a go-between called “Mountain Climber” was known in the press long before he was revealed publicly.

The clue was in the name, since Duddy was a marathon runner who often ran up to the hilltop fort on Grianán Mountain at Inishowen in Co Donegal, a 20-minute drive from home. The British called him “June”, later “Soon”.

His intermediary work began in 1972 when he was asked by RUC Chief Supt Frank Lagan, to encourage the Official and Provisional IRA to remove their guns from the Bogside on the day of Bloody Sunday.

By 1974, MI6 agent Michael Oatley was working to build relationships. Duddy sent Oatley’s messages to his contacts in republican circles, hoping for positive signals, but everything was deniable.

The Provisional IRA was suspicious. During its 10-day ceasefire at the end of 1974, he was summoned to a meeting in Dublin with the organisation’s army council.

There, Duddy overheard them asking “whether they should kill him as a suspected agent”. Noel Gallagher was one of those present: “[Duddy’s] fears were well-founded,” he told The Irish Times.

The 1981 hunger strike marked Duddy’s lowest point. His son Brendan remembers his father in tears when Bobby Sands died in May 1981. “It was catastrophic for him.

“He was very much a republican but didn’t believe that the death of one person was worth having a Republic of Ireland for. He was a pacifist and he didn’t want them men to die.”

Oatley was replaced by “Fred”, a Scot with an upper-class accent – who came pretending to be a businessman wanting to create jobs in Derry and bored his father and brothers at a long meeting.

The mood changed when he produced a letter from Northern Ireland secretary of state Peter Brooke. The contacts worked until November 1993 when the IRA/British message-delivery service fell apart.

“Fred” claimed to London that McGuinness had said “the war is over and we need your help to end it”. McGuinness was furious, saying that he had never uttered any such thing.

Duddy was later interrogated for four hours by four senior republicans about whether he had sent the message, but he convinced them that he had not. The controversy, nevertheless, ended his role as an intermediary.

Today, Gallagher offers new insight into the false communication. Duddy had called, asking to meet him in a hotel in Park Lane in London. When he arrived, the “war is over” message had already been written by Fred in pencil.

“He said to me, ‘Do you think I can get away with that’?” Gallagher recalled. “Fred”, he believes now, was trying to persuade doubtful British cabinet members “that there could be a deal done in Ireland”.

Following the “war is over” controversy, the IRA sought direct talks with the British, which prompted long-running talks between SDLP’s John Hume and Sinn Féin’s Gerry Adams and back-channels to Dublin and London.

Besides Duddy and Gallagher, there was Denis Bradley. In November 1974, Bradley, who was a priest at the time, married McGuinness and long-term girlfriend Bernie Canning near Buncrana in Co Donegal.

Speaking last week to The Irish Times on the margins of the 43rd anniversary of the Dublin and Monaghan bombings in Dublin this week, Bradley described Duddy as “intense” and “dogged”.

The private negotiations that involved Duddy, Gallagher and Bradley were critical to the peace process, believes one of those who was involved, Martin Mansergh: “They were absolutely essential.

“The Provos were never going to agree to stop on the basis of another political sermon from a distance. They had to talk to people and talk through things, both the general environment and the situation,” he said.

He used to talk in elliptical ways. It was partly his cover. He had more facial muscles than any one I have ever met

To describe someone’s politics, for example, Duddy might say that there are some people who are into fish but not into shellfish, yet it is still fish but just not the fish he knows.

“He used to talk in elliptical ways. It was partly his cover. He had more facial muscles than any one I have ever met,” Durkan remembers, adding that Duddy could articulate with just the wave of his hand, or a gesture.

“In an awful lot of his engagement, he was engaged in the business of explanation of somebody else’s position or a situation rather than his argument,” Durkan said.

Duddy’s role “was incredibly risky,” said Peter Sheridan, the most senior Catholic ever to serve in the RUC, finishing as an assistant chief constable with the Poice Service of Northern Ireland.

“Some of them [IRA leaders] would have treated him with a certain amount of suspicion,” said Sheridan, who is now chief executive of Cooperation Ireland. “They knew who he was talking to.

“The fact that he was able to walk his way out was an achievement in itself. He was clever enough not to put his own analysis or his own spin on things when he was carrying messages.

“There was a temptation to soften it or change it a bit in the hope that it might land better. He felt he needed to be straight, unpalatable as it was.”