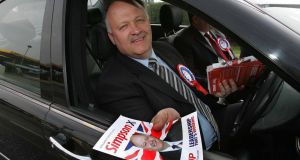 The DUP’s David Simpson has represented Upper Bann, which voted for the UK to leave the EU, since 2005. Photograph: David Sleator

Unionist candidates with different styles and values are vying for votes in Upper Bann ahead of the Westminster election on June 8th.

The DUP’s David Simpson has represented the constituency, which voted for the UK to leave the EU in last year’s referendum, since 2005, when he unseated former UUP leader David Trimble.

A Gospel singer and Orangeman with traditional unionist values, he also runs a meat business on top of his constituency work.

Joining the incumbent on the ballot paper for the UUP is decorated military veteran and somewhat liberal unionist Doug Beattie MLA, who, unlike Simpson, voted against Brexit and also supports marriage equality and revision of Northern Ireland’s abortion law.

The main towns in Upper Bann include Craigavon, Lurgan and Portadown, which were the scenes of some of the worst unrest and violence during the conflict in the North and home to a small dissident republican contingent in recent times.

In last year’s and this year’s Assembly elections, DUP candidates received 4,000 and 6,000 more votes than UUP candidates, which if replicated next month makes Simpson favourite.

However, Simpson has had some unwelcome publicity in the last week. Beattie, who served in Iraq and Afghanistan, called on him to explain and apologise for false claims that he had visited front-line troops in Afghanistan in 2010.

Simpson, who has visited troops in Iraq, had circulated an election leaflet which included a photograph of him with soldiers and the claim he had visited the front line in Afghanistan, which was later dismissed as a “printing error” by the DUP.

He had been due to visit Afghanistan but the trip was cancelled by the British army because it could not find body armour large enough to fit him.

Beattie has also had to apologise during the campaign after police were told that he had recycled Assembly election posters that did not include the name of the printer or election agent, a requirement for all printed election material.

Tactical voting from nationalists and Alliance voters could help Beattie, but like his party colleague Danny Kinahan in South Antrim his vocal support for the campaign to end prosecution of the armed forces for Troubles-related crimes could alienate some people.

SDLP stalwart Kelly made a political comeback to claim the final seat in Upper Bann at the Assembly election in March, but the party has lesser known councillor Declan McAlinden on the Westminster ballot paper this time.

It is a two-horse race between the UUP and DUP if unionist turnout is strong, with the only nationalist candidate in with a chance of sneaking up the middle and claiming the seat being Sinn Féin’s John O’Dowd.

Turnout, tactical voting, views on Brexit and the current Stormont impasse could be some of the issues at play come June 9th when the results are in, but it seems Simpson will retain his seat.