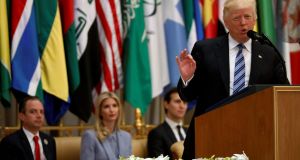 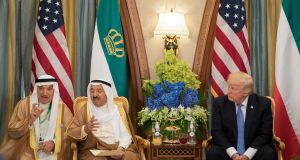 US president Donald Trump during a meeting with the Emir of Kuwait, Jaber Al-Ahmad Al-Sabah, with his interpreter, left, in Riyadh, Saudi Arabia, May 21st, 2017. Photograph: Stephen Crowley/The New York Times

Middle Eastern nations “cannot wait for American power to crush” Islamic terrorism for them, US president Donald Trump told Islamic leaders on Sunday, arguing that America’s role is not to “lecture” or “tell other people how to live, what to do, who to be, or how to worship”.

In a widely-anticipated speech to Muslim leaders on the second day of his visit to Saudi Arabia, Mr Trump encouraged Middle Eastern leaders to “drive out” terrorists, saying: “Terrorism has spread all across the world. But the path to peace begins right here, on this ancient soil, in this sacred land.”

“We will be guided by the lessons of experience, not the confines of rigid thinking.

“And, wherever possible, we will seek gradual reforms - not sudden intervention,” he said in the speech to 50 Muslim leaders at the Arab-Islamic-American Summit.

“Our friends will never question our support, and our enemies will never doubt our determination. Our partnerships will advance security through stability, not through radical disruption.”

Mr Trump also singled out Iran as a key source of funding and support for militant groups.

His words aligned with the views of his Saudi Arabian hosts and sent a tough message to Tehran the day after Hassan Rouhani won a second term as Iran’s president.

In a speech that was in part an attempt by the US president to distance himself from previous anti-Muslim comments and his controversial introduction of an travel ban aimed primarily at some Muslim-majority countries, the president said the fight against terrorism was “not a battle between different faiths, different sects, or different civilizations.

However, he warned that “the nations of the Middle East cannot wait for American power to crush this enemy for them.

“The nations of the Middle East will have to decide what kind of future they want for themselves, for their countries, and for their children.

“It’s a choice between two futures and its a choice America cannot make for you. A better future is only possible if your nations drive out the terrorists and drive out the extremists.

“There is still much work to be done. That means honestly confronting the crisis of Islamic extremism, and the Islamists, and Islamic terror of all kinds.”

The speech comes at the end of a two-day visit to the Saudi capital of Riyadh, where the US president - who is still struggling to cast off a series of scandals involving the FBI and Russia - received a warm reception, participating in a traditional sword dance at Murabba Palace on Saturday along with US secretary of state Rex Tillerson and commerce secretary Wilbur Ross.

Mr Trump was accompanied on the trip by his wife Melania and several senior aides and senior government officials.

The visit may mark a significant turning-point in US-Gulf relations following tensions between the Obama administration and several Gulf countries over their human rights records.

On Sunday, Mr Trump told King Hamad of Bahrain that there “has been a little strain [between the US and Bahrain] but there won’t be strain with this administration”.

He also praised Egyptian president Abdel Fattah al-Sisi, telling him: “You have done a tremendous job under trying circumstances.”

During the Riyadh visit, the US signed off on a major arms and investment deal which could be worth as much as $350 billion over 10 years, which will see Saudi investment into the US in exchange for US weaponry.

Saudi Arabia is one of the main purchaser of US arms exports, and the deal, involving defence contractor Lockheed Martin, was negotiated in part by Trump’s son-in-law Jared Kushner.

As part of the agreement, the Saudi Kingdom signed billion-dollar investment agreements with US companies General Electric and Blackstone Investment.

The US and six Persian Gulf nations also agreed to clamp down on the financing of terrorism, amid concern in Washington that wealthy individuals in the Gulf are continuing to finance organisations such as Islamic State and al-Qaeda.

Mr Trump arrives in Israel on Monday for a two-day trip, during which he will visit Tel Aviv and Jerusalem.

On Tuesday, he is due to meet the head of the Palestinian Authority, Mahmoud Abbas.