Coveney: FG should seek to ‘unite rather than divide’

Simon Coveney on the campaign trail talks about the leadership race in a press conference Sunday (21st May). 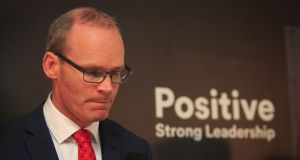 Minister for Housing Simon Coveney has said Fine Gael should be a party for everyone which “seeks to unite rather than divide”.

Mr Coveney, who trails Minister for Social Protection Leo Varadkar in the Fine Gael leadership contest, said the party’s goal should be “the creation of a society in which everyone can participate and an economy from which everyone can benefit”.

Fine Gael leadership tracker: track the contest and check who your local TD, Senator, MEP and councillor is supporting.

Speaking at the launch of his Uniting Ireland document in Dublin on Sunday he reiterated his belief that he was “fighting for the soul of Fine Gael”.

“Despite the very real progress we have made since the days of [John A] Costello and [Garret] Fitzgerald, we remain a country with deep divisions. Our political system has splintered into a range of new parties and alliances, some of which represents only a narrow section of our population,” he said.

“Some have argued that Fine Gael should follow suit. That we too should focus on our core vote and retreat back to the comfort zone of narrow tribal and ideological politics. I disagree. I believe passionately that Fine Gael must reach out to all of our citizens.”

He said the Fine Gael leadership needed to set out a clear reform agenda for the party, drawing on the lessons from the last general election. They needed to modernise government to make it much more effective at delivering ambitious policy goals and deliver a clear vision for transforming the State into a country in which every person has the opportunity to reach his or her full potential.

Mr Coveney said some Fine Gael TDs and Senators told him they would vote for Mr Varadkar because the Dublin West TD had “momentum” in the leadership race.

Mr Coveney said he did not blame Oireachtas members for looking to see which way the tide was flowing to make sure that they were “on side” in the contest.

“What’s happened here is once this process kicked off momentum developed on Leo’s side and many people who had very, very positive conversations with me came to me and said ‘Look Simon, I see this going one direction I don’t want to get on the wrong side and I hope you understand,’” he said.

“And you know what, I kind of respect them for being up front about that. That’s politics.”

Mr Coveney said it was very frustrating from his point of view, but it was just one part of the contest as 232 councillors wanted to have their say along with 20,000 members.

“No Oireachtas colleague has voted yet, they have simply made declarations,” he said.

“We haven’t conceded anything.”

Mr Coveney said it would not be the first time people had changed their minds once they heard arguments of substance.

However, when asked about what ministry he would like if Mr Varadkar became leader, he admitted he was “more concerned” for some of the people who were supporting him.

Introducing Mr Coveney at the event in Dublin, Minister for Health Simon Harris said: “We don’t need a coronation. What we need is a debate.”