Young refugees of Kakuma turn to music to forget their troubles 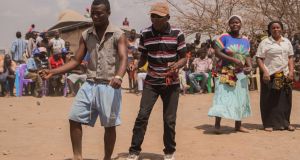 As children poke their heads through the flap windows of an already crowded tent, an MC announces over a crackling microphone that the show will be moved outside to accommodate the increasing numbers.

The auditions for Kakuma’s Got Talent are about to begin and the residents of Kalobeyi, a new settlement just outside the main refugee camp, are keen to see the show. A crowd of about 250 forms a large circle, braving the punishing conditions – there are no trees here to protect from the heat of the midday sun and gusts of wind whip up small tornadoes of dust.

For the young refugees of Kakuma, music has become an important way of expressing their struggles with displacement and life in the camp.

In his song Sorry, rapper STIB pleads for forgiveness from the girlfriend he was forced to leave behind in Burundi, while another act explains how God’s will guided him through the Congolese jungle to safety after his village was burned and family separated.

“Music is very important because when you sing music you touch the hearts of people. It brings people together,” says Janet, a 22-year-old refugee from South Sudan who performs in the multinational group Adonai. Their song stresses the commonality of suffering people throughout Africa. “We need to sing this song so we can bring peace and be united in this camp,” she says. “We stay together so there is no discrimination or tribalism so people will know that we have to live together.”

Initiatives like Kakuma’s Got Talent provide an important outlet for the young residents of the camp. For those who have completed or dropped out of school, there is precious little to occupy their time and many become depressed or turn to drugs like khat, cannabis or home-made alcohol.

“We realised that some years back there were no ways that youth could raise their voices,” says John Thomas, a Congolese refugee who leads Kakuma Youth Voices, organisers of the competition. “No one could know that in the camp you have talented youth.”

The group was founded in 2015 and now has volunteers from all communities within the camp. John highlights the importance of combating idleness through drama, sport and multimedia projects. “Most evening hours [young people] have nothing to do, nowhere to go. What they think is to remove the trauma and stress . . . let me take some drugs.”

Activities are used as a vehicle for lessons about the dangers of addiction and violence, but also a reminder that refugees are no less capable for their precarious legal status. He recounts the surprise of Kenyan onlookers when a girls football team from Kakuma defeated Nairobi’s Kenyatta University in a best-of-three contest.

Though the efforts of volunteers and NGOs have undeniably improved life in the camp, Kakuma inspires little but despondency in its young residents. Boredom is by far the most common complaint – the intense heat of the day restricts most outdoor activities to early morning and evening, while there is almost no electric light to make use of the long equatorial nights.

Those venturing out past curfew, usually about 8pm, face the threat of arbitrary beatings by Kenyan police. This threat is particularly true for young women who are frequent targets of violence both in their homes and in the wider community.

What few forms of entertainment exist are scarcely affordable. Some restaurants and bars in the oldest part of the camp have pool tables and broadcast Premier League games, for which young fans will often sell already meagre food rations to pay the 10ksh (9c) viewing fee.

“There is a lot of wasting time. You can’t do anything,” says Mohammed (23), who arrived from Somalia 10 years ago. He has found life especially difficult since he sustained an ankle injury that has prevented him from playing football, by far the most popular pastime in the camp, for the past three years.

Others echo this sentiment, and even those who cannot remember a life before Kakuma struggle to call it a home. Their official temporary status has become de facto permanent, though the possibility of resettlement remains a distant glimmer of hope.

Several of the NGOs present in Kakuma offer mental health services, where treatment for stress and depression are commonplace. Julie Kraus, a counsellor with the Jesuit Refugee Service, says the lack of control over one’s life is stifling, especially for those who have grown up in this environment and are forced to relive their trauma while participating in interviews for resettlement in other countries.

“It causes more anxiety, more stress, more distancing yourself from the reality that you’re ever going to be able to leave and have a normal life. Because even though for some people this is the only life they know it still doesn’t feel like life.”

Instead, she tries to keep her patients’ focus on finding work, continuing education, practising their religious beliefs and building relationships in the community.

Under the shade of a UNHCR-branded tarpaulin outside his house, Mohammed, a 23-year-old from Burundi, speaks with a faltering voice about his life in Kakuma. He tries to remain positive, socialising and playing sport, but cannot escape the mental stress of life here and the lack of opportunities to develop himself. “But because there is no other place, no other help you can get . . . you decide to stay here just to survive. We have no other place to go, but this is not a real place for us.”

He says he could not recommend for others to come here, even if they are struggling elsewhere. “There is nothing here you can do. You stay, you struggle for nothing . . . you end up here maybe until you die here . . . because you don’t have any other place to go. You just remain here.”

4 ‘I’m the meme queen’: A Q-Anon digital soldier marches on