Theresa May to shift election focus back to Brexit 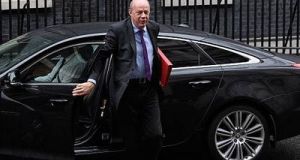 British work and pensions secretary Damian Green: he said £100,000 was a “reasonable inheritance” to pass on. Photograph: Getty Images

Theresa May will on Monday attempt to shift the focus of Britain’s general election back on to Brexit following a sharp tightening in the polls amid mounting disquiet over her policies.

Launching the Conservatives’ Welsh manifesto, she will frame the election as a choice between her and Jeremy Corbyn to lead the Brexit negotiations.

“Our future prosperity, our standard of living, our place in the world, and the opportunities we want for our children – and our children’s children – are either in the strong hand you grant me by supporting my candidates in this election…or the weak hand of Jeremy Corbyn backed by the Liberal Democrats, Plaid Cymru and the SNP who don’t want Brexit to succeed. It is your choice, your decision,” she will say.

The Conservatives on Sunday ruled out changes to a controversial plan for funding home care for the elderly despite a sharp drop for the party in the polls since it was announced.

Under the proposal people needing care at home would have to fund it themselves until their assets, including the value of their home, fall below £100,000.

Opposition parties have dubbed it the “dementia tax” because those most affected would be people with long-lasting, debilitating conditions which render them unable to care for themselves.

People receiving care would be allowed to remain in their home until their death but the cost would be deducted from their estate. Work and pensions secretary Damian Green said £100,000 was a “reasonable inheritance” to pass on to dependants, and ruled out looking at the policy again.

“Everyone knows there will be a decent inheritance for them, nobody will have to lose their home during their lifetime or the lifetime of their surviving spouse,” he told the BBC.

Some Conservatives are blaming the social care policy and other tough manifesto proposals for the drop in the party’s support, with a YouGov poll for the Sunday Times showing them just nine points ahead of Labour. This is the narrowest margin since the beginning of this year, and although other polls on Sunday showed the Conservatives a few points further ahead, the trend is the same.

As the Conservatives’ support has fallen since the manifesto’s publication on Thursday, Labour’s has continued to rise. Labour’s support under Jeremy Corbyn is now almost the same as it was under Ed Miliband at this stage of the 2015 election.

Apart from the social care policy, the Conservative manifesto proposed two further changes that will hit pensioners. One is a change in the way increases to the state pension will be calculated and the other is that a winter fuel allowance will be means tested.

The party has also proposed the abolition of free school lunches for children, to be replaced by a free breakfast.

Labour has seized on the social care proposal in an effort to capture votes from the elderly, promising to cap at £72,000 on the total anyone would have to pay for home care.

“What we are seeing this weekend is the Conservatives under growing pressure because they have chosen a dementia tax. If you or your loved one has or will get dementia, they are coming for you,” he told Sky News.