Varadkar: I want Ireland to be a country that rewards work

Speaking before taking part in the ‘Streets of Dublin’ 5km race in the city centre on Sunday (21 May) morning, Mr Varadkar clarified early comments made on his campaign. Video: Mary Minihan 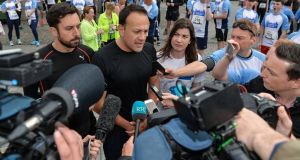 Leo Varadkar speaks to media before the Streets of Dublin race at the CHQ Building in Dublin. Photo by Sam Barnes/Sportsfile

Leo Varadkar, who is in pole position to become Fine Gael leader and Taoiseach, has said he wants Ireland to be a country that rewards work.

The Minister for Social Protection who officially launched his leadership campaign on Saturday was asked on Sunday what he meant when he said he wanted to lead a party for “people who get up early in the morning”.

“And that of course includes many forms of work, it’s not just paid employment. There are a lot of people, for example who get up very early in the morning because they’re carers, or because they’re parents.”

Speaking before taking part in the ‘Streets of Dublin’ five kilometre race in the city centre on Sunday morning, Mr Varadkar welcomed Minister for Housing Simon Coveney’s decision to stay in the Fine Gael leadership contest and said he had no plans for an early election. The Irish Times leadership tracker shows Mr Varadkar has a significant lead over Mr Coveney.

Mr Varadkar said he was seeking a mandate from party members and councillors as well as TDs, Senators and MEPs.

“I’m very keen as well that the contest should continue and I’m pleased that Simon Coveney decided to stay in the contest because it’s absolutely important that we take this debate and this opportunity to reinvigorate Fine Gael to the councillors, to the members across the country,” he said.

He said a party leader was in a much stronger position if they had a mandate not only from the parliamentary party but also councillors and members.

“I want to seek a mandate from the members as well.”

Mr Varadkar insisted he did not want to have an early General Election.

“I have no plans whatsoever for an early election. We have a confidence and supply agreement with Fianna Fáil. We have a Programme for Government negotiated and agreed with Independents and it’s my intention to honour those agreements if I’ve the opportunity to lead Fine Gael.”

A more democratic Fine Gael would be the “hallmark” of his leadership of the party, he said.

Mr Varadkar said he would propose a “rolling manifesto” that got updated two or three times a year at policy conferences involving all public representatives as well as representatives of party members.

“Membership election and a more democratic Fine Gael only starts with this election. It’s going to be something that will be a hallmark of my leadership if I’ve the opportunity to be leader.”

He said he would publish some policy proposals tomorrow and a document on how Fine Gael could be modernised, reformed and energised during the week.

The leadership contest will be decided using a weighted voting system across three electoral colleges - the parliamentary party, councillors and party members.