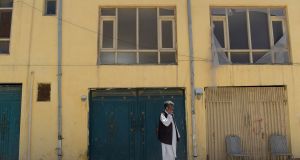 An Afghan man talks on a phone outside a house in which a German aid worker was killed on Saturday, in Kabul. Photograph: Shah Marai/AFP/Getty Images

A German aid worker and an Afghan guard were killed in and a Finnish national was abducted from a house in Kabul late on Saturday, an Afghan interior ministry spokesman has said.

An investigation was being conducted into the incident, which occurred at about 11.30pm local time.

The Finnish foreign ministry confirmed that a Finnish national had been kidnapped in Afghanistan but had no further comment. There was no immediate comment from the German foreign ministry.

Kidnapping is a longstanding problem in Afghanistan, mainly involving Afghans being abducted for ransom.

However, foreigners have also regularly been targeted by kidnappers, either for ransom or to put pressure on their governments.