Nurses say Government is exaggerating the cost of their pay claim 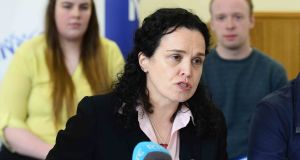 Nurses have accused the Government of exaggerating the cost of meeting their claim for an across-the-board pay rise of up to 12 per cent.

The Irish Nurses and Midwives Organisation (INMO) said the Government was seeking to portray the cost of providing safe care in hospitals as being “unattainable”.

On Tuesday the Minister for Public Expenditure Paschal Donohoe maintained that nurses were making unsustainable wage demands which would compromise public pay and budgetary policy.

Mr Donohoe said a strike by nurses over pay would negatively affect patients and breach the existing public service agreement. He said nurses’ pay claims would cost €300 million and also lead to follow-on demands by other groups in the public service.

The INMO, which is the country’s largest nursing union, on Monday urged its members to vote to go on strike over pay in a ballot to be conducted over the next three weeks.

The union said, should the ballot be carried by members, nurses and midwives would stop work for 24 hours. The union said if the dispute remained unresolved, its industrial action would escalate to further 24-hour stoppages. It said its members would provide only a minimum of lifesaving care and emergency response teams.

The INMO said on Tuesday it was not too late for the Government to engage in “realistic engagement”.

It said it was disappointed that rather than taking part in direct talks, which the union had sought in August and September, the Minister had opted to communicate through the media.

It said the Government would not find nurses wanting in proposing cost-saving measures if it engaged with the union under provisions of the current public service agreement dealing with recruitment and retention.

The INMO said the Government “ has a responsibility to ensure the safety, and security, of their citizens, and this includes having an enough nurses and midwives, adequately trained”.

“The consequences of not doing so are detrimental to human health and mortality.”

It said hospitals were unable to recruit midwifery staff to match the recommended safe level of staff midwives-to-births ratio.

Nurses are campaigning for an across-the-board pay increase to address the issues regarding unions seeking pay parity with groups such as physiotherapists and speech and language therapists. They argue that their members are paid about €7,000 a year less than staff in therapy grades but work more hours.

Last week the trade union Fórsa warned the Government that it would face pay claims by other healthcare staff if it provided additional pay increases to nurses over and above those set out in the current public service agreement.

The Public Service Pay Commission found in a report in September that there was no generalised recruitment and retention problem in nursing and midwifery, although it highlighted localised difficulties.

The Government – based on the commission’s recommendations – put forward a €20 million package aimed at dealing with the issues including increased allowances and faster access to promotion. The Government said 18,000-20,000 nurses could benefit from the proposals.