Woman (77) who got new lung, kidney and hip is ‘game for everything’ 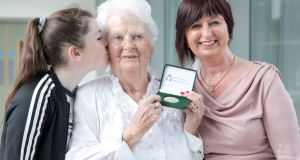 Vera Dwyer after being presented with her gold medallion being congratulated by her granddaughter Sarah Kiernan (12) and her daughter Della Beirne.

A Co Sligo woman has become the world’s longest surviving single lung transplant recipient, 30 years after undergoing the procedure in the UK.

Vera Dwyer (77) was awarded a gold medallion from the Irish Heart and Lung Transplant Association on Tuesday in honour of her achievement, one which has earned her a place in the Guinness Book of World Records.

Vera, from Keash, was diagnosed with idiopathic pulmonary fibrosis, an irreversible and ultimately fatal lung disease, in the 1980s. With her condition deteriorating rapidly, she was put on the list for a lung transplant, where she remained for up to two years until a suitable donor became available.

At the time, lung transplantation was not available in Ireland and she had to travel to Harefield Hospital in England in 1988 for the life-saving procedure.

“I got one chance and I said I’m going to take it,” Vera said, speaking at the award ceremony in the Mater Hospital in Dublin. “I wanted to be there for the family, and to see the children growing up.”

Her daughter Della Beirne recalls her mother being sick for a long time while she was growing up. “We’d been living with illness for 10 years before the transplant happened. They were harrowing times.”

Vera spent months on a ventilator in Harefield, and survived while two other patients with donated lungs died. Every day since, she says, she prays for the person who donated her lung. “Without them, I wouldn’t be here today.”

“She’s game for everything. She’ll do anything, go anywhere,” Della says of her mother since the operation. “She’s our rock.”

Vera, a mother of four, grandmother of seven and great-grandmother of three, received a kidney transplant in 2009 and underwent hip replacement surgery just a few months ago. She has also suffered fractures in her leg, shoulder and wrists at various times.

She has been in the care of the National Heart and Lung Transplant team at the Mater since it opened in 2003.

Consultant transplant physician Prof Jim Egan, who leads the programme, highlighted the great changes that have occurred since Vera had her procedure. “In 1988, lung transplantation was unplanned, had unknown outcomes and involved pioneering surgery. Today, it’s a routine procedure.”

“One thing that hasn’t changed is our dependence on the generosity of donors, but fortunately there were enough donors last year to ensure we carried out a record number of transplantations.”