Number of road deaths in 2019 likely to exceed last year 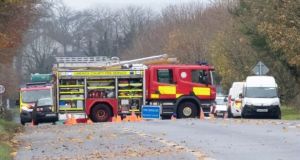 The scene at Garraunboy, Adare, Limerick where a teenager was killed by a car in the early hours of Sunday morning. photograph Liam Burke/Press 22

Four fatal collisions over the past number of days have brought the total number of people killed on Irish roads between January 1st and 9am on Wednesday to 130.

Last December, 15 lives were lost on the State’s roads and given that there are 10 days remaining of November, it is likely that numbers of road deaths for 2019 will exceed last year’s record low of 142.

On Tuesday alone three men died following crashes. At 12.18am a man aged in his 70s was killed when his car collided with a ditch in the Taur area of Newmarket, Co Cork. The man was the sole occupant of the car. Gardaí have appealed for witnesses.

Later that day another man died following a crash in which his motorbike was in collision with a vehicle on Dublin’s M50. The crash happened at the merging of the off ramp and M50 at Junction 5 southbound at about 7.45am. The 29 -year-old male motorcyclist was taken to Connolly Hospital Blanchardstown where he later died.

A third man died in a two-vehicle crash, involving a van and a jeep that occurred on the R284 at Jinks Cross, Carraroe, Co Sligo at about 7pm. The driver of the van was taken to Sligo University Hospital with non-life threatening injuries.

On Sunday, a 16-year-old was fatally injured when he was struck by a car in the townland of Garraunboy, Adare, Co Limerick. The incident occurred at about 3.45am. Gardaí at Newcastle West are appealing for any witnesses to come forward, particularly any motorists who were travelling in the area at the time and may have dash cam footage.

Anyone with information on any of the fatal crashes is asked to contact the gardaí at their local station or on the Garda Confidential Line on 1800 666 111 or any Garda Station,

The Road Safety Authority has been asked for a comment on the fatalities and one is expected.