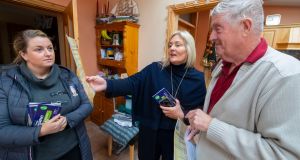 The Fine Gael national executive council is under pressure from the parliamentary party to address controversy around the party’s byelection candidate in Wexford, Verona Murphy.

Fresh comments emerged on Tuesday in which Ms Murphy said children as young as three could have been “manipulated” by Isis.

Ms Murphy apologised for a second time on Monday night after she told The Irish Times she believed that Isis was a “big part” of the migrant population in Ireland.

She was also forced to apologise the previous day after comments to RTÉ in which she said some asylum seekers may need to be “re-programmed”.

Taoiseach Leo Varadkar has said he is standing by Ms Murphy despite the string of controversial comments, and said he would canvass with her before polling day.  Four Dáil byelections will take place on Friday, November 29th. They became necessary after a sitting TD from four constituencies was elected to the European Parliament in May.

Two Fine Gael sources on the party’s executive council said a meeting is expected to be held on Saturday, and the issue will “undoubtedly” feature.

“Not only are members of the party hopping mad with Verona over her comments, there is also anger higher up in the party that on a day when we should have been in the headlines with good news on the broadband plan, that did not happen and she took away from that.

“The executive will have to do something. There is no way the party can stand over what has happened. There will be pressure at the meeting, I would imagine, for action,” said one source.

People Before Profit TD Bríd Smith on Tuesday called on the Taoiseach to de-select Ms Murphy as the party’s candidate because she had “doubled down on the hateful rhetoric we’re heard in the media from her”.

Ms Smith said Ms Murphy’s comments were “absolutely incendiary” as she quoted a report in the Wexford People, that “addiction and homelessness are the result of bad choices”.

The People Before Profit TD said “not only is she blaming the poor for poverty, she is blaming the migrants for every other crisis that exists”.

Quoting a report in the Wexford People, Ms Smith cited remarks by Ms Murphy that “we also have to take into account the possibility that Isis have already manipulated children as young as three or four”.

Calling on the Taoiseach to de-select Ms Murphy as a candidate, she said “if you don’t the use of the race card and increased use of it is on your shoulders as the leader of this country”.

Ms Smith claimed that Ms Murphy “needs to be de-programmed”, and said it was “utterly shameful what she said”.

Mr Varadkar acknowledged that Ms Murphy was “very, very wrong” in relation to her comments on migrants.

“They were ill-advised, they were misinformed, they were absolutely wrong, and it doesn’t reflect the position of my party. And I think it is right that she has retracted those comments and has apologised for them.”

When Ms Smith asked the Taoiseach “how high is your bar against racism in your party”, he said that “as somebody who probably knows a little bit more about experiencing racism than perhaps you do my bar – I don’t know whether you say it’s high or low – but it’s certainly not something that is tolerated in the party I lead”.

He said he spoke to Ms Murphy on Tuesday and “told her that what she said was not on”.

He said she had already withdrawn the comments and apologised for them.

Ms Murphy was due to appear on RTÉ’s Late Debate programme on Tuesday night but pulled out shortly after 7pm. One Fine Gael source said that senior figures were unhappy with her plans to appear, and a decision was taken that she should not participate.