Number of missions by Coast Guard helicopter crews to be reduced 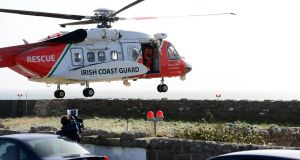 Irish Coast Guard helicopter crews are being withdrawn from certain medical missions which are not deemed to be search-and-rescue, or medical, emergencies.

The Department of Health has confirmed that search-and-rescue pilots on 24-hour duty will no longer be expected to undertake inter-hospital patient transfers from Monday.

The department says this follows a recent determination by the Irish Aviation Authority (IAA), and says night-time cover for such missions will be provided in the “short term” by the Air Corps, using a fixed-wing aircraft.

The IAA would not comment on the decision, stating it would be “inappropriate” to comment on this or any related matter due to an ongoing investigation into the Irish Coast Guard Rescue 116 crash with the loss of four lives on March 14th.

However, it is understood the move is part of a wider focus by the IAA on the operation of Irish Coast Guard flights by CHC Ireland.

The IAA is no longer happy with an arrangement whereby pilots on 24-hour search-and-rescue could double up for inter-hospital patient transfer.

Inter-hospital transfer by air of patients for organ transplants and other critical operations is primarily provided by the Air Corps or by commercial providers in fixed-wing aircraft, and is managed by the National Ambulance Service (NAS) in conjunction with the HSE.

It has been provided by the Air Corps, based in Custume Barracks, Athlone, Co Westmeath, since June 2012, during daytime hours only. It has been called out more than 3,300 times and has airlifted over 1,700 patients.

Irish Coast Guard helicopter crews had been the third option requested by the NAS, but in the last couple of years they had flown an increasing number of such missions – up to 150 annually.

This was due to a combination of lack of Air Corps availability, particularly at night, and a willingness by helicopter operator CHC Ireland to provide value for money as part of the €500 million contract with the Irish Coast Guard for a fleet of Sikorsky S-92 helicopters.

However, inter-hospital patient transfers fall under helicopter emergency medical service (HEMS) aviation rules, which means such missions can only be provided by pilots on 12-hour shifts with a 12-hour rest period afterwards.

Separate search-and-rescue (SAR) regulations could only apply if the patient was critically ill and it was, therefore, a medical evacuation.

The Department of Health has said the IAA has informed it that HEMS rules, limited to 12-hour shifts, should apply, with effect from September 5th.

The Department of Health said it is “working with the HSE to address the long-term implications of the ruling”.

The Department of Defence has said that the Air Corps will “support” a “night-time air ambulance service to facilitate urgent patient transfers to Britain” from September 4th to October 3rd, and this will be provided primarily by 101 Squadron with a Casa CN235 fixed-wing aircraft.

It is understood that CHC Ireland has considered hiring non-SAR crew to fly HEMS missions from Dublin or Waterford to get around the flight hours ruling. However, this could restrict use of a helicopter primarily required for 24-hour duty.

The Air Accident Investigation Unit (AAIU) and the Garda Síochána are continuing their inquiries into the cause of the Rescue 116 crash.

A preliminary AAIU report found that the route guide selected for the mission appeared to have lacked vital information on the north Mayo coast when the Dublin-based Irish Coast Guard helicopter crew was tasked to provide “top cover” to their Sligo counterparts for a medical evacuation.

An initial request for Air Corps “top cover” had been turned down as staff were not available.

A separate enhanced ground proximity warning system (EGPWS), which is not to be relied on for navigation but does provide an alert in an emergency, did not have co-ordinates for Blackrock programmed into it.

CHC Ireland has said that the AAIU’s preliminary report recommendations on reviewing route guides and on inappropriate fitting of satellite beacons in lifejackets worn by the air crews have been “actioned”.

It is understood that while Blackrock has been programmed into the EGPWS, there has as yet been no radical overhaul of route guides for primary navigation.

The Irish Airline Pilots’ Association has confirmed it has raised concerns about the IAA’s role in approving navigational information with successive government ministers.