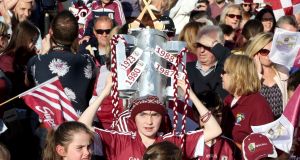 A young supporter at the party on Mainguard Street. Photograph: Joe O’Shaughnessy

“Did they win? They won without even scoring a goal!” Noel Shovlin laughed, as several thousand spectators before a big screen hugged, kissed, sprayed pints and threw ice creams in the air.

Shovlin, now 36, was a small boy among emigrants in Manchester when Galway last won the All-Ireland senior hurling final in 1988.

A double win for senior and minor teams had to mean “a party for at least two weeks”, he said.

“If you can’t join ’em, beat ’em” had been the big draw of the Eyre Square experience after a scramble for tickets had left many GAA supporters disappointed.

Fortunately, sunshine broke through early-morning clouds and temperatures rose in every sense as groups of students, visitors from nearby hotels and several direct provision residents were among the first to view the minor match against Cork.

Senior hurler Joe Canning’s nephew Jack aroused some of the early cheers with two goals in the second half, and there was glee when Galway secured an 11th minor title.

Nandini Gupta, and her father, Sharat Gupta, from northern India had just arrived in the city centre on a short visit and couldn’t resist the occasion.

“I am studying in Trinity College and this is our first visit – it is cricket that we go mad for and hockey at home, so we are curious about this,” she said.

Equally curious was Orleans Ferreira from Rio de Janeiro in Brazil, who is studying English at the Bridge Mills language school.

As the senior game got under way against Waterford, he and his classmates were instructed in the finer points of the game, including puck-outs and block tackles.

Their hurling “tutor”, Michael O’Malley, originally from Leitir Móir in south Connemara, was delighted that the visitors could witness “one great, great match”.

“This is Hill Eyre Square and the real Electric Picnic all in one – we even have the muck,” said Eileen O’Connor, a first-year student from Donegal.

Colin Pritchard and Betty Smith from Penkridge in Staffordshire were festooned in maroon and white, and almost too focused to talk. Ms Smith was born in Galway. Her father, PJ Smith, owned a shop in the city, and she left in 1955, at the age of 15.

“I don’t quite understand the scoring, but it is a hell of a game,” her partner said.

Noreen Gibbons from Castlebar, Co Mayo, professed to being overwhelmed. She has been living in Galway 10 years. She watched the match with her son Luke (6) and daughter Farah (5), and it was the first time she had watched a full hurling final.

“We’re all fired up for two senior Gaelic football finals,” she said, with Mayo men and women both due to play Dublin. “I have never even seen hurling played at home, and it is sort of magic,” she said.