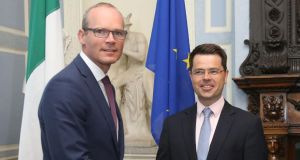 Minister for Foreign Affairs Simon Coveney has said DUP leader Arlene Foster made a “real effort” with her recent comments on the Irish language.

His comments came as he and British government Northern Secretary James Brokenshire prepare to meet the five main political parties in the North to establish if there is a basis to reconvene formal talks. Sinn Féin last week rejected a DUP offer to immediately restore the Assembly and have a time-limited parallel talks process.

“It is the first time that I have ever heard a leader of the DUP commit to legislating for the Irish language,” said Mr Coveney. “It’s the first time I’ve heard a leader of the DUP say that unionism has nothing to fear from facilitating and supporting the use of the Irish language in Northern Ireland. I think it does change the tone of the debate.”

Northern Secretary James Brokenshire is to meet the DUP, Sinn Féin, SDLP, UUP and Alliance separately at Stormont House on Monday to see if there is any prospect of talks resuming on the restoration of the Executive.

Mr Coveney will visit Northern Ireland on Tuesday for talks with delegations as he is in Brussels on Monday meeting the EU’s chief Brexit negotiator Michel Barnier to discuss the UK’s exit plans.

On Sunday, SDLP leader Colum Eastwood told The Irish Times returning to a process of “talks about talks is incredibly frustrating”.

“With budget holes deepening, school principals and health workers calling out for a lifeline, political parties cannot simply hide behind slogans and sound bites,” he said. “The SDLP will be making it very clear to both the British and Irish Governments that a meaningful process requires meaningful engagement. “That means all parties putting their cards on the table. It means an open dialogue with no more smoke screens.”

Mr Eastwood added that he believes “a deal is still doable – it has always been doable – but only if the political will exists to do one”.